A Game of Groans by George R.R. Washington, reviewed by Stephen Theaker 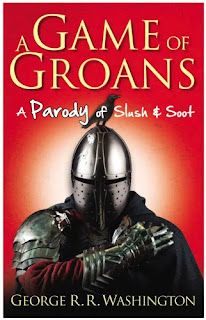 Comedy is an awfully subjective thing. Much as I adore Annie Hall, I reckon Dana Carvey’s The Master of Disguise runs it darn close as one of the funniest films of all time (“Sometimes the Master of Disguise he comes back, sometimes he don’t!”), an opinion likely to earn me the hatred of most right-thinking IMBD users. It just tickles me, as do The Animal, Jack and Jill and The Love Guru. So I understand how subjective comedy can be, and I’m not a comedy snob. I’ve watched every single episode of Two and a Half Men.

Having said that, I can now go on to discuss A Game of Groans by George R.R. Washington (chortle!) (Virgin, pb, 232pp), and, while acknowledging that you might well find this parody hilarious, explain why I thought it such a miserable, joyless experience. It just isn’t funny. I read the entire book stony-faced, never cracking a smile and laughing just once, on page 128, at the name “Lord Analwarts Candlestick”. Even that was a quick, thoughtless bark rather than a sign of true appreciation, mentioned here only to pay the book its due, small as it is. Most of this book’s jokes revolve around wind-breaking (chapter one begins “Allbran Barker broke wind”). Normally a fart joke is all I need to make me laugh (Brent Spiner’s inadvertent squeaking in The Master of Disguise was so funny our children came downstairs and asked us to laugh more quietly so that they could sleep) but these weaker emissions dissipated without provoking the slightest mirth.

The plot is basically that of A Game of Thrones, with the threat from the north here being the Others, though in a typically pathetic running joke they want to be known as “The Awesomes!”, and interject to say as much whenever other characters mention them. If you’re not laughing yet, you will be when you hear that the Others (“The Awesomes!”) are Harry Potter, Lord Voldemort, Darth Vader, Spock, C-3PO, Aslan and Obi-Wan Kenobi. Hilarious!

The book has one notable feature. After all the jokes made in the UK about those daft Americans who’d think The Madness of George III a sequel, or couldn’t have coped with the Philosopher’s Stone, here’s a book whose subtitle has been changed for our benefit, from A Sonnet of Slush & Soot to A Parody of Slush & Soot. Presumably because we wouldn’t have got the joke (it’s rather shorter than A Song of Ice and Fire) and would have thought it actually was a poem.

Would that the solicitous soul who changed the title for we simple British folk had read the book itself, at least to page two, because then we would have been spared what looks like (unintentionally, I’m sure) the most racist joke I’ve encountered since, well, since I left Keighley. I’ll give the American author a pass on that (a similar gaffe was once made by Guy Gardner, to his writer’s horror), but the writer must take the blame for turning abused and exploited women from the original into raging nymphomaniacs, or having a tribe talk in Ooga-booga language (even if they are pretending). Whether having the Jon Snow character speak Spanish, with his every utterance translated in footnotes, is offensive or not is for Spanish speakers to decide, but it makes for desperately feeble, tedious humour.

A Game of Groans is so poor that, not having read the George R.R. Martin original (so admittedly I may have missed the nuances of some jokes), I began to read through it, ignoring the surface attempts at humour to discern what I could of the original inspiration hiding within, like reading Plato to get a glimpse of Socrates. Daft, but I had to find a way to get through this enthusiastically, relentlessly, ruthlessly (because you just know it was written to order) unfunny book. I tried reading it with a bottle of Crabbies on the go, and I tried reading it after watching episodes of New Girl and The Big Bang Theory that had me in stitches, and both times it still fell flat. Or to put it another way (as the book does at p. 184): “Ever watched Anymal House while sipping on grog, gnawing on a turkey leg and rubbing a cheese grater across your stomach? It was a lot like that.” It’s less funny than Meet the Spartans and takes three times as long to get through. It’s also surprisingly unpleasant about the writer whose work it is exploiting. But if you enjoy this I won’t judge you, so long as you don’t judge me for liking Happy Gilmore and Freddy Got Fingered.
Posted by Stephen Theaker