Señor 105 and the Elements of Danger, edited by Cody Quijano-Schell, reviewed by Stephen Theaker 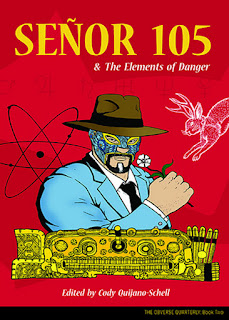 “I am Señor 105 of Mexico. I fight for freedom, the defense of mankind and I am a friend to all children.” Iris Wildthyme’s superluchador chum, who has a mask for every element and (I think) a power for every mask, takes his place in the spotlight in Señor 105 and the Elements of Danger (Obverse Books, 106pp), edited by the character’s creator Cody Quijano-Schell, who also supplies the cover design (Paul Hanley being the artist) and a story, “Jackalope”, in which a pair of skinnydippers are attacked by horned bunny rabbits. That gives you a taste of what to expect here! If you go back far enough I think this book counts as a spin-off from Doctor Who, but the tone is more reminiscent of the quirky (and sadly short-lived) television series The Middleman, which also featured a luchador or two; its comedy comes from the seriousness with which a rather silly world is treated by its unfortunate (from our point of view) but happy-go-lucky inhabitants.

In “Señor 105 contre el Bigote de Perdición” by Lawrence Burton, 105 is up against the man with the mightiest moustache in Mexico. It feels like a great idea for a story, without becoming a great story itself. Similarly, “Megaluchador vs Iguanadios” by Jonathan Dennis, which sees 105 climbing into a giant robot version of himself to battle a giant lizard, isn’t quite as much fun as it sounds. “Are You Loathesome Tonight” by Blair Bidmead features a lounge lizard (literally) Elvis who is creating a malformation of space and time with his music, the results described in powerful simile: “‘It’s like an Escher drawing,’ gasped Sheila. ‘Made of meat,’ I concurred.” Take the space between this paragraph and the next to let that image sink in!

This is another worthwhile collection from Obverse, though I didn’t enjoy it quite as much as some of their other titles. On the whole, the stories don’t quite manage to fulfil the promise of their wild ideas: reading the summaries above and below, I’m still surprised I didn’t like the book more. The dialogue and narration tends to lack the spark, crackle and wit a concept like this needs to make it soar. But the book does get stronger as it goes on. In Julio Angel Ortiz’s “Anti-Element”, Matador de Almas, Chiquito Invader, Terrible Prince, Capitan Muerte and the Princess of Pandemonium (Pandora X) collaborate to send 105 to die at the hands of the desperate hero of a battle-ravaged dimension, the result an entertaining interdimensional team-up. “There and Back Again” by Niamh Petit has a clever idea – a time control device that lets a person switch with past and future selves – and makes of it the best story of the collection. A future version of Señor 105 has bad news about what’s to come, and as the story moves into that future he keeps switching with progressively unhappier selves from further ahead. In “Glyph” by Joe Curreri an old enemy returns, one with a grudge from the days when he was merely Señor 93, before the book ends with a fragment from the editor and a note putting the character in context.

Like previous Obverse titles, the review copy of Señor 105 and the Elements of Danger was marred by a number of small errors, but I’ll always put up with those for the sake of this publisher’s dedication to publishing the kind of books I always look forward to reading. In an indie scene dominated (or perhaps it would be fairer to say propped up) by horror, it’s good to have a small press devoted to this quirky, modern brand of science fantasy. This being a fairly old book now, one whose shiny, unfulfilled promise caught my eye from the depths of the review pile, and a limited edition in the Obverse Quarterly series at that, it may not be available for purchase in your preferred format by the time you read this (see below for links). If not, look out for similar titles from Obverse in future, or try the series of Señor 105 novellas being published by Obverse’s ebook offshoot Manleigh Books. I will: Señor 105 doesn’t manage a smackdown here, but the potential is definitely there.