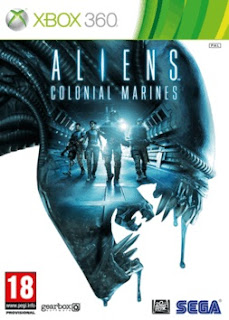 Aliens: Colonial Marines (Sega, PS3). It would be pointless for me to go into great detail regarding the backstory to this game: suffice to say, it follows straight on from the events of James Cameron’s rather excellent Aliens.

From the outset, it’s clear the developers have attempted to maintain a cinematic experience in this game. The titles and original music by James Horner create the perfect atmosphere, and we’re assured by this beautifully rendered intro that we’re in safe hands. From then on the backstory establishes the game’s scenario: explore the Sulaco…

The film’s original sets are replicated well, but the lack of options for setting up the game’s video display (screen brightness, position) cause an early frown, as the game is very dark, and the position of the HUD is clipped slightly on my 46" set. I shook off these two minor niggles and discarded my frown, unaware at such an early stage it would return with a vengeance very soon.

The characters are stereotypical for military FPS: gravel-voiced grunts, mirroring my frown of earlier, looking as though they’ve just walked out of a WWF game and donned combats. They lead you onto the Sulaco where the ship’s cryogenic sleep chamber is perfectly realised. Other areas appear bereft of creativity with unimaginative repeating corridors, decorations and patterns. My frown now began to creep back, as the textures lacked detail, the controls rather jerky and somewhat “heavy”, the continuing darkness (lacking contrast) maintaining for an obvious “what’s in the shadows?” effect. When Michael Biehn’s character, Corporal Hicks, makes an appearance you’ll be forgiven for thinking things are on the up. They’re not, as the likeness to Michael Biehn is utterly terrible, and the actor performs voice duties with an obvious lack of enthusiasm.

As the game “progressed” down to LV426 and the settlement of Hadley’s Hope, nothing much changes I’m afraid. The darkness continues, and as the first xenos appeared I shook my head. The detail and colour gamut are straight out of a 1990s effort, a betrayal of gamers and fans of the Alien series alike. The xenos are cartoony, perfectly matching their adversaries. The game then leads you from one “You gotta push this so we can do that” objective to the next. Character is non-existent, leading me to skip the story segments to see if things would improve and if I’d care. They don’t and I didn’t.

Then I found myself climbing into a Power Loader, sealed in an arena with a big “Boss” xeno, accompanied by its smaller cousins. The boss was instantly dispatched by a choking grip from the loader’s claw, only for the boss to die and fall through a wall. The smaller xenos kept on coming, and coming, and coming, until it was obvious after five minutes of repeated play the software had glitched. Reset. I plodded on, from one badly rendered environment to the next, unimpressed by the ability to “upgrade” my weapons with either an extended mag, silencer, or telescopic sight, or collect movie characters’ weapons, with only a “sneak by” level providing me with any thrills (in spite of the xenos looking like men shuffling in uncomfortable rubber suits). Finally, after eight or so hours of play, the whole shoddy affair was over, and I breathed a sigh of relief and groan of sorrow. “Game over man, GAME OVER!”

Indeed, and not a moment too soon. Save your money. 2/10.
Posted by Stephen Theaker