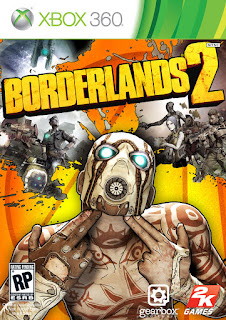 It’s impossible to cover every complexity Borderlands 2 (2KGames, PS3) provides the player. Its scope is astonishing, its detail overwhelming both visually and from a character POV, even though the scenario is fairly basic. In short, there’s a bad guy called Handsome Jack in partial control of the planet Pandora, and the player or “Vault Hunter” is pitted against him, his minions and the indigenous lifeforms of the planet. Did I say player? You can choose from four characters (with a fifth, the mechromancer, available via DLC): an assassin, a siren, a soldier and an atypical heavyweight grunt. Each character enjoys their own unique special combat action skill, which is enhanced via levelling up. These characters also enjoy three skill trees, enhancing combat in a variety of ways.

This all sounds simplistic, but the real attractions of Borderlands 2 are its visuals and characters. Characters are all finely drawn (some appearing a second time from the first game, as is one location) providing a great deal of humour, tragedy and depth. From a killer robot’s A.I. core wanting to change its ways and be installed into a radio, to another obsessed with introducing sexual innuendo into its conversations, a commando stating: “And I was just gonna complete my comic collection,” as he corrodes into a cloud of gas, Pandora in all its open world splendour containing its insane inhabitants soon becomes a believable, viable setting. Although some critics have objected to the comic book appearance of the graphics (think Moebius in Heavy Metal magazine) the alien landscapes – from frozen wastes to dusty deserts – contain an enormous attention to graphical detail, making you wander up to objects to wonder exactly what they’re for. The entire planet has an established ecosystem, populated by various plant and animal life that all add depth to the setting.

The game is a shopper’s heaven, with thousands of boxes, lockers, crates and other containers to loot. Some contain money, or a basic rusty pistol that performs with a pathetic “tut, tut, tut”, others an acid firing bazooka that reduces badass gun loader robots to sizzling scrap. The developers have gone on record saying the software generates millions of different gun types, all with varying effectiveness for the many missions and adversaries encountered. Along with these, the player will need to match protective shields (some absorb bullets and add them to your inventory, others electrocute enemies when they melee attack) as well as grenades that can steal an adversary’s health, or bounce up down on the spot spitting bullets as they rotate. There are some devastating combinations to be assembled early on in the game, forcing the player to believe the following levels will be a breeze. However, you’ll soon find your favourite pistol/SMG/rocket launcher/sniper rifle will become sadly redundant against more formidable foes and objectives. It’s hard to let go, but it has to be done as more goodies tempt you with their devastating effects. The attention to design detail for these objects is superb, with every pick-up beautifully rendered.

Borderlands 2 provides a game experience like no other. Every aspect speaks of quality, from the atmospheric soundtrack that’s not too intrusive, to the sound design and animation – weapons feel as they should, the larger ones taking just that little longer to heft. Okay, it’s not perfect, as some objectives can become a little repetitive, but the game allows missions to be toggled – so it’s just a case of switching to a different mission – either side or main story. The whole package is huge in its scope, and you’ll be spending a great deal of rewarding, challenging game time caught up in the absorbing locations of Pandora’s borderlands. Spend your money. 9/10.
Posted by Stephen Theaker