The Wurms of Blearmouth by Steven Erikson / review by Stephen Theaker 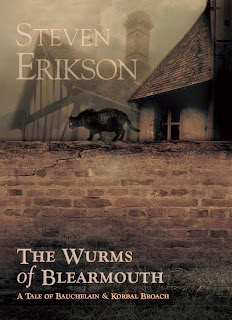 Lord Fangatooth Claw the Render, insane lord sorceror of West Elingarth’s Forgotten Holding, celebrates dominion over Spendrugle village with daily tortures of his brother, his rule upheld by three iron golems with buckets for heads, at least one of whom took him five months to create. By his law, being a stranger is punishable by death, which suits the villagers since it leaves no survivors of the shipwrecks from which they draw their pocket money. But the new folks brought in by the tide are the kind that take a fair bit of killing. Most dangerous are the first to arrive: Bauchelain and Korbal Broach, necromancers, one sharp and expansive, the other taciturn and brutal, both ready to kill at the twitch of an eye.

The Wurms of Blearmouth (PS Publishing, hb, 124pp) is the fifth novella about this pair and their loyal servant, Emancipor Reese. The fourth, Crack’d Pot Trail, was quite brilliant but unusual, Bauchelain and Korbal Broach in the wings till the end as their pursuers preyed upon fellow travellers. Here, the necromancers play a more active role, rather like children poking an anthill. Chronologically, it seems to follow book two, The Lees of Laughter’s End, but knowledge of other books isn’t required for the enjoyment of this one. Characters enter the scene with colourful histories, battle-wounded and vengeful, and whether relevant events happened in previous novellas, Steven Erikson’s eleven colossal Malazan novels or collaborator Ian Cameron Esslemont’s four won’t matter much to anyone except fans trying to piece everything together.

It’s a story of venal grotesques, each uniquely drawn, with whom we’re happy to see dark powers play. Lord Fangatooth, who has Todd Ingram’s way with a quip and a scribe on hand to record them. Whuffine Gaggs, the beachcomber who greets survivors with a smile, but hides a knife behind his back. Felooval, innkeeper, brothel owner, hiding a deadly secret in her bosom. Her daughter, dreaming of big city prostitution while stroking her lizard cat. The broken taxman who wants to take her (but not the cat). Ackle, who, hung by the neck, lives on, and worries about freezing solid in the winter. Hordillo, the sergeant who will never admit to an exceedingly unfortunate marriage. Tiny Chanter, Wormlick, Sordid: all distinctly – often uncomfortably – memorable.

Though its length would make this ideal for those unready to embark upon the ten thousand pages of Erikson’s Malazan novels, only fans and collectors are likely to find twenty pounds an attractive price for such a short book; those unsure should try the novellas collected cheaply as The First Collected Tales of Bauchelain & Korbal Broach. Those three are terrific, but this is even better, an entertainment for brain and gut; clever, vivid, funny and surprising, with a delicious tone, mining a rich, dark seam – “the delightful pleasure of evil”, Erikson calls it – producing murderously good dialogue. “What? What have you done to me?” asks one villain, to receive Bauchelain’s reply: “Why, I have killed you.” And like Erikson, he does it with style.

After a bit of editing, this review appeared in Interzone #243, back in 2012.
Posted by Stephen Theaker