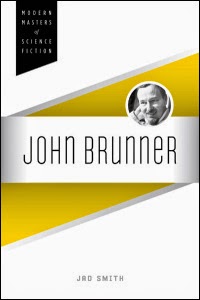 Sarah Pinborough once said that “anyone who thinks any writer, bestseller or on the breadline, writes for the money, is a fool”, but it would be equally foolish to think money has no effect on what they write – and especially on what we get to see of their work. This book on John Brunner (University of Illinois Press, hb, 196pp), who gave up scholarships and well-paying jobs to concentrate on writing, but frequently focused his efforts on fulfilling the particular needs of the market, illustrates both sides of the coin. Smith draws a picture of him as a writer often stranded in “interzones” (a word used here so frequently that a review in these pages was surely inevitable): too pessimistic and unpredictable for American readers, too market-orientated for the new wave; a devoted fan (after leaving the RAF he hoped to “spend a year at home writing ... and fanning”), but apparently unpopular on the convention scene.

Though coming from a university press – it forms part of the Modern Masters of Science Fiction series from the University of Illinois – this book isn’t steeped in literary criticism or swamped in jargon; general readers interested in the subject will find it perfectly accessible. Where it is polemical, it’s in support of the author’s ideas rather than his politics, in particular his thesis that Brunner’s whole oeuvre is worth studying, not just the books that won awards; he wants to situate “his better-known works within the larger arc of his career”. He shows how Brunner’s writing career did not progress neatly from Ace entertainments to hardback Hugo-winning literature. Rather, the two types of book intertwined throughout his career, as he rushed some books out to fund the concentrated spells of attention that more ambitious works required.

That Stand on Zanzibar was released to a hostile reception, and treated as a commercial, American appropriation of the New Wave, may be a surprise to readers accustomed to regarding it as a well-established part of the science fiction canon. A review of Telepathist in Vector described it as the kind of affected intellectualism “one might expect from an author who sports a goatee and a wine-coloured corduroy jacket”. Although the book is very much on Brunner’s side in such matters – Moorcock, Aldiss and Platt are portrayed as nothing short of schoolyard bullies – it does acknowledge his moodiness and, for example, Zanzibar’s immense debt to Dos Passos. Asides such as that describing “John and Marjorie’s relationship as sexually open and emotionally tumultuous” suggest a biography proper would be worthwhile.

Given that this is a book which, very usefully, draws on several hard-to-find primary sources – fanzines, letters and convention speeches, for example – it’s disappointing that it is so parsimonious with its quotations, rarely providing more than a line or two of Brunner himself. While that contributes to its readability, it does mean the reader is left to accept the author’s paraphrases and interpretations of Brunner’s words, rather than being able to come to their own conclusions. A short interview is included, from 1975, but that gives us only a snapshot of a particular period of his writing, a single mood. An extensive bibliography takes up the book’s last quarter, so at least signposts to the original texts are there for those who want to investigate further.

The book doesn’t provide a radical new way of looking at Brunner’s work – the overall effect is of a well-crafted and lengthy encyclopaedia entry written by someone with a slight bias towards to the subject – but it argues well for the continuing interest and relevance of his work. Hard to argue with that when Smith’s summary of The Sheep Look Up sounds like a week’s worth of headlines from The Independent: “Fish stocks are depleted. Natural bee populations have collapsed ... Human bodies fester with once-controlled but now drug-resistant diseases.” Smith is also right to highlight the strangeness of such a book coming from the same writer as, say, The Super Barbarians and its goofy portrayal of human exceptionalism.

Readers unfamiliar with Brunner’s novels would find this a perfect introduction to them (except in so far as it gives away the plots, but that’s only to be expected in a critical study). Even those who have read the award winners may find their interest piqued by discussion of fringe titles: The Atlantic Abomination sounds much better than the title would suggest. Smith mentions in places that certain works were never reprinted, and it’s a sad fact that Brunner was almost entirely out of print at the time of his death, but one pleasure of reading this book is knowing almost all of it is now available (albeit, in some cases, marred by appalling typos) via the SF Gateway. This book left me keen to read more Brunner, and also to read further titles in the Modern Masters range.

After a bit of editing, this review appeared in Interzone #245, back in 2013.
Posted by Stephen Theaker