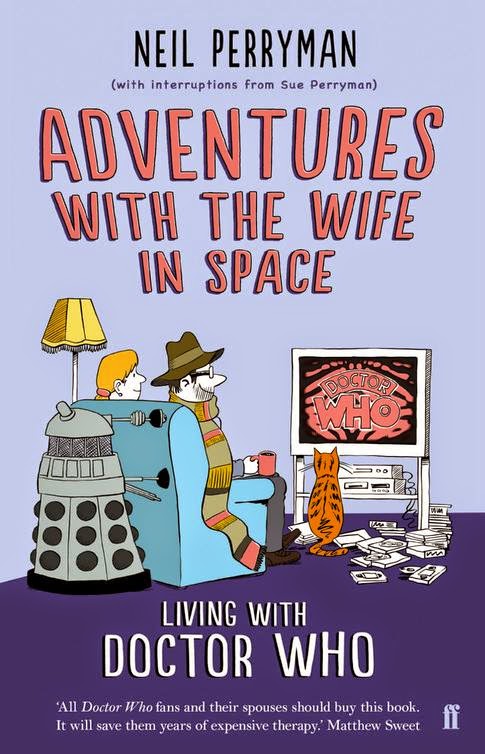 “… imagine if you could convince someone who hasn’t seen the episodes to sit through them all? Someone who wouldn’t know if a story was supposed to be good or bad before they’d even sat down to watch it; a person who didn’t know what was coming next; a person who’d agree to watch the whole thing with an open mind and without prejudice. That’s where you come in, Sue.”

In 2011, Neil Perryman persuaded his wife Sue to watch all of Doctor Who, from start to finish, going so far as to watch fan-made reconstructions where the originals remain lost. While the viewing marathon was underway, one or two stories being watched a night, Sue’s reactions and ratings were being recorded on a blog, Behind the Sofa, quoted here in small chunks. Adventures with the Wife in Space (Faber and Faber, ebook, 3179ll) is the story behind this adventure.

I found that a bit disappointing, in that I was more interested in reading about the adventure itself. But that’s the blog. This is more The Making of Behind the Sofa, a behind-the-scenes book, packaged in a way to make it seem of more general interest. More than the story of watching the series, this is the story of Perryman’s relationship with the series, and although he’s a few years older than me (his first memory – “of anything” – is from the month I was born: the drashig in “Carnival of Monsters”), it’s one very similar to my own. Love for the Tom Baker years, interruption during the Davison years (rugby for him, cubs for me), not watching much of Colin Baker, and then, at university, realising that he had missed the renaissance of Sylvester McCoy’s second and third years and that leading back into enjoying the programme as a whole.

This will be an enjoyable if unsurprising read for fans of Doctor Who, and it may also appeal to fans of Nick Hornby; it reminded me a lot of Fever Pitch. But it’s not essential, and those intrigued by the book’s pitch who haven’t heard of the blog will probably be disappointed by what’s not here. In the early chapters I was thinking, okay, that’s enough build-up, let’s get onto watching the episodes, but it never really happens. Plenty of life, but could have done with more wife.  ***
Posted by Stephen Theaker