Shadows of the New Sun: Stories in Honor of Gene Wolfe / review by Stephen Theaker 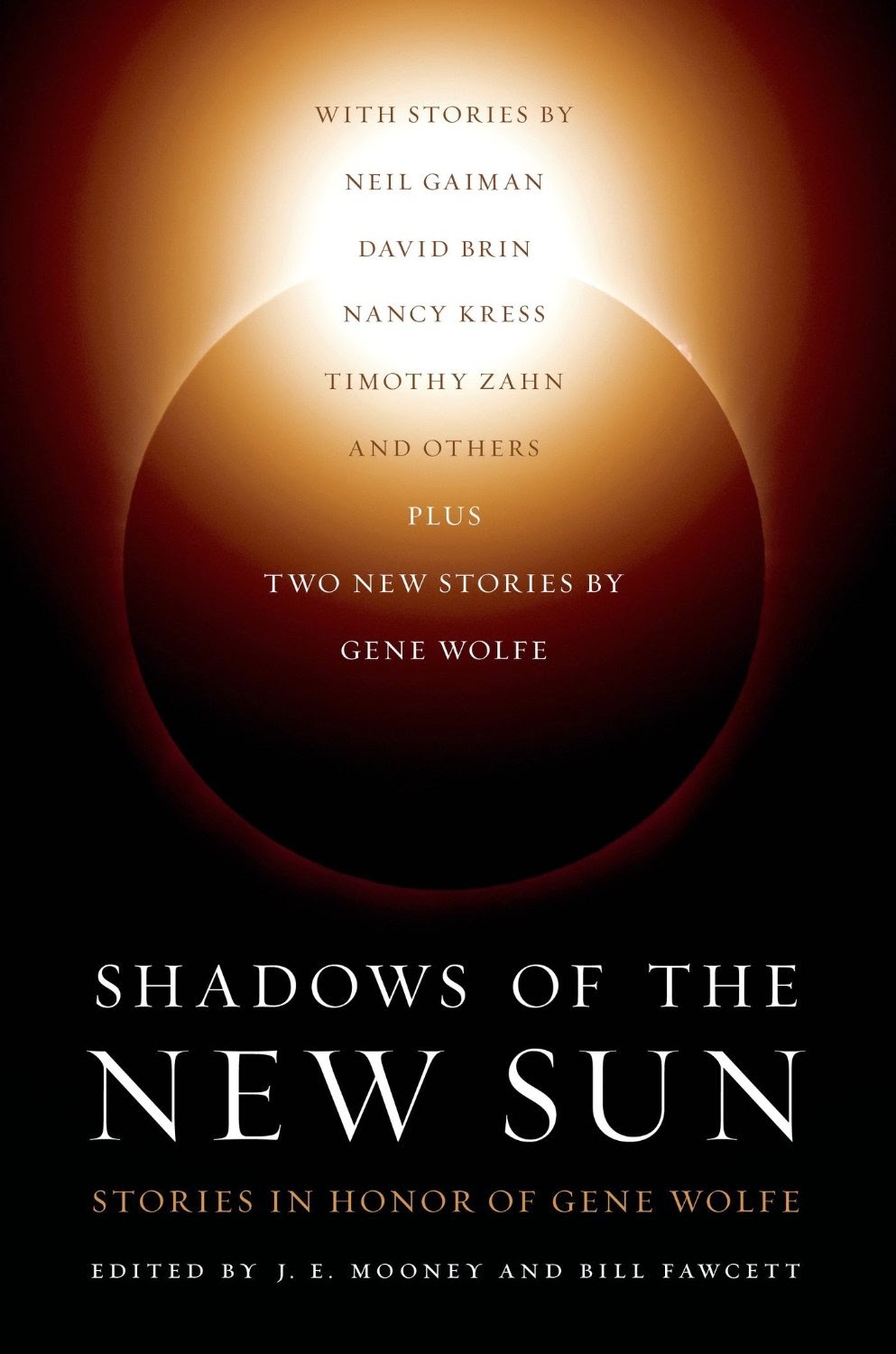 Not to be confused with the book of critical writings by the same name about the same author, Shadows of the New Sun (Tor, hb, 416pp) is an anthology of fiction celebrating the work of Gene Wolfe. Two of his own stories bookend the collection. In “Frostfree” Roy Tabak gets home to find a new refrigerator with unusual capabilities has been delivered. The story develops in interesting directions, but in itself isn’t quite enough to demonstrate why Wolfe is the kind of writer to deserve a tribute. Closing story “Sea of Memory” is more reminiscent of the work for which he is lauded. Adele is helping to build a colony, but memories are foggy and time seems strangely confused. The conclusion disappoints, but the disorientation is convincing.

Neil Gaiman may attract as many readers to this book as Gene Wolfe, and “A Lunar Labyrinth” won’t disappoint them. An aficionado of rural attractions goes to see a maze which visitors would wander at night, until the locals decided to burn it. Less superstarry names offer stories that are just as good. Steven Savile’s “Ashes” is a moving, subtly magical story about Steve, whose sweetheart died; in desperation he goes on the honeymoon they had planned. “...And Other Stories” by Nancy Kress plays on the fiction-hopping of “The Island of Doctor Death and Other Stories”, telling the story of Caitlin, cursed by her grandmother to live through the most miserable of fictional lives. Jack Dann’s “The Island of Time” riffs on the same source, but this time fiction is an escape from abuse. The stories here are generally short, but Aaron Allston’s fifty-page “Epistoleros” justifies the space it’s been given, from its clever title – it’s a story of gunslingers told through a series of letters – to its equally clever ending.

The notes don’t always identify the stories to which these are paying tribute, and most can be enjoyed without having read the originals, though that means you get Wolfe’s ideas secondhand. “The She-Wolf’s Hidden Grin” by Michael Swanwick, about the daughters of a wealthy perfumier, and whether they are the descendants of colonists or the descendants of natives who murdered and replaced the colonists, is one of the best stories here, but “The Fifth Head of Cerberus” deserves to be read first. Mike Resnick and Barry Malzberg’s “Tourist Trap” visits the protagonists of “The Marvelous Brass Chessplaying Automaton” in a Bavarian prison, and makes much more sense read after the original story.

Despite the title, disappointingly few stories connect to the Book of the New Sun, though of course there’s more to Wolfe than that quartet. “In the Shadow of the Gate” by William C. Dietz has Severian, between Shadow and Claw, targeted by an offworld assassin and battling beast men while passing through the great wall surrounding Nessus. The queerness of Severian’s world is captured better by Jody Lynn Nye in “The Dream of the Sea”, set after the coming of the new sun; the Order of Esoteric and Practical Knowledge sends Nedel on a quest to find the missing Autarch. Severian makes a guest appearance (as does Wolfe) in Joe Haldeman’s “The Island of the Death Doctor”, a “To Your Scattered Bodies Go” with fictional rather than historical characters.

Surprisingly, Wolfe is revealed as a friendly, convivial figure, quite unlike his stern, unforgiving narrative style: “what would you do to earn a Gene Wolfe approving chuckle?”, asks Judi Rohrig, while Nye describes him as “a courtly gentleman with a twinkle and a sense of humor, modest, patient, appreciative”. The notes mention convention encounters as often as his fiction, creating a sense that many contributors were chosen as much for their friendship with Wolfe as their artistic affinity with his work. Songs of the Dying Earth introduced Jack Vance’s readers to writers with similar sensibilities; that’s less likely to happen here, but the range of stories will encourage readers to explore Wolfe’s rich back catalogue.

Michael Stackpole’s “Snowchild” is a good adventure story – a soldier and a war-mage form an unhappy alliance to rescue a girl from the maggot-folk – and his X-Wing novels have their admirers, but one wouldn’t especially recommend them to Wolfe’s fans. Timothy Zahn”s ‘A Touch of Rosemary” is a fun, clever fantasy, as the Wizard Knight sees off an invading witch king by inviting him to dinner. Todd McCaffrey’s “Rhubarb and Beets” has a nice line in casual cruelty – a fairy girl who gloats about her father’s cleverness to a man he stole from his family – and ends very well. “The Log” is a good story by David Brin about Russian families living miserable lives to be near exiled dissidents. There are no dull stories here, just a couple that are confusing, and most are very good. Novices might prefer to read The Very Best of... first, but if not they’ll still enjoy this.

After a bit of editing, this review appeared in Interzone #247, back in 2013.
Posted by Stephen Theaker