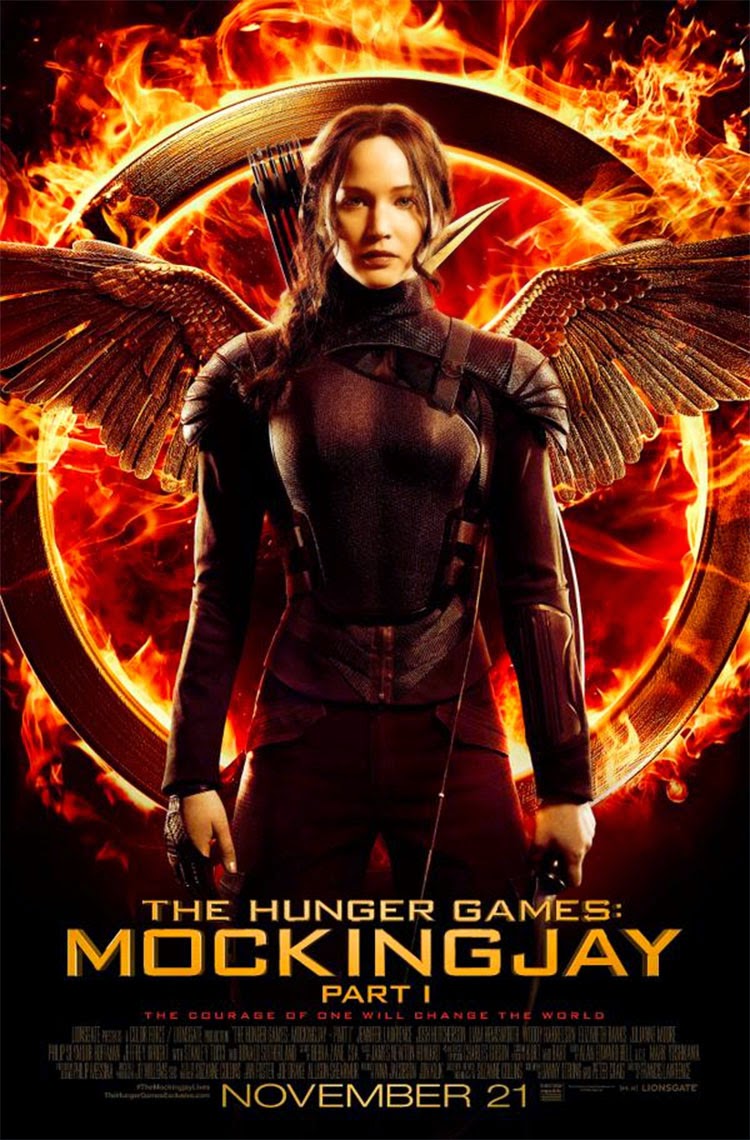 Director Francis Lawrence had his work cut out for him with The Hunger Games: Mockingjay – Part 1, the first of the two-part conclusion to The Hunger Games series. He had to adapt the first (and more subdued) half of the final novel in Suzanne Collins’s trilogy into a film that maintains the viewer’s attention and builds tension without stealing the show from the finale.

Though the film’s beginning suffers from an overindulgence in mourning war ruins, Lawrence pulls off what turns out to be a tense and emotionally stirring film more about psychological games than fights and explosions… but it still has some of the latter!

Protagonist Katniss Everdeen, having thrown a wrench (an arrow actually) into the most recent game, recovers in the underground headquarters of District 13, hitherto rumored to be destroyed. Here Katniss discovers that although the arena games are over, she’s still a contestant in a game whose stakes are much higher.

The districts of Panem, fueled by Katniss’s Hunger Games heroics, have grown more hostile toward the Capitol, their wealthy oppressor. District 13’s scheming leadership wants to intensify this animosity to overthrow the Capitol. Their plan: convince Katniss to become the Mockingjay, a symbol of revolution that will stoke the fire building within the districts.

Sounds like a great plan. However, one huge obstacle deters Katniss from jumping into that role wholeheartedly: her two-time Hunger Games cohort and budding love interest Peeta Mellark has been captured by the Capitol.

When Action Wanes, Bring in the Big Shots
Because Mockingjay – Part 1 has notably less action – I count two brief action scenes – than The Hunger Games and The Hunger Games: Catching Fire, it needs something beyond the reputation of its predecessors to keep the viewer engaged. The solution comes in an all-star cast.

The Manipulators
The buttons in Mockingjay – Part 1 get pushed mostly by three conference room connivers intent on manipulating the public and duping their adversaries.

Philip Seymour Hoffman’s post-mortem appearance as Plutarch Heavensbee shows what a loss the film world experienced. Heavensbee, a District 13 political puppeteer, seeks to unveil and capitalize on what makes Katniss so appealing to the public. He sees Katniss as a tool to overcome the Capitol. When Katniss gets angry, Hoffman/Heavensbee could just as well be an automobile enthusiast admiring the roar of a Maserati.

Julianne Moore slips rather than barges into the conflict as District 13 President Alma Coin, a less easily categorized complement to the other publicity-seeking (Heavensbee) and confrontational (Snow) power players. With her grey clothes, eyes, and hair, Moore portrays a tepid leader whose true intentions are hazy. Is she good? Is she bad? She’s “in the grey”. Flip a coin!

On the Capitol side, Donald Sutherland’s President Snow is a case study in self-control, arrogance, and cunning. Snow, whose pristine white hair and suit belie his malicious intent, has a nearly omniscient view of district goings-on. His carefully prepared televised speech explains to the have-nots that the Capitol is the reason they are alive. “Your districts are the body,” he says. “The Capitol is the beating heart.” The implication: you can’t survive without a heart. And don’t you dare let him catch you giving the Mockingjay salute!

Katniss Everdeen: Pawn, Liberator, or a Bit of Both?
In popular films, there are still far too many beautiful numbskulls and female action heroes who do what a typical male action hero would do. Jennifer Lawrence’s Katniss Everdeen, ranging from tentative warrior to distraught teenage girl, offers hope for the plight of female leads. Katniss uses guile and pluck rather than sexuality or boys’ club bravado to achieve her objectives.

One example of Lawrence’s talent is the contrast between Katniss’s awkwardly delivered prepared speech and a rage-charged impromptu invective against President Snow. “If we burn, you burn with us!”

With all those power players tweaking the dials, what is Katniss’s role? Is she merely a pawn, or does she influence the outcome? Here’s something to think about: Katniss must find the balance between District 13’s desire to fuel the uprising and her own desire to protect Peeta. Complicating matters, a psychologically off-kilter Peeta doesn’t win any district friends when he encourages would-be Capitol enemies to lay down their arms.

Peeved with a Capitol President
With President Snow and the Capitol’s privileged inhabitants, Mockingjay – Part 1 gives us “The Man”. What makes this film (and the whole series) so compelling is the goal of “sticking it” to him.

And who does society rest its hopes on? Not on Thor or Jason Bourne. Not on James Bond or the Men in Black. Instead, the fate of Panem rests on a 17-year-old girl who can’t stand seeing others in pain.