The Sign in the Moonlight and Other Stories, by David Tallerman (Digital Horror Fiction) | review by Rafe McGregor 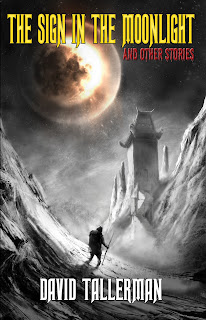 David Tallerman has achieved not only remarkable but rare success with his short fiction. In the space of nine years, he has had more than seventy-five stories published in venues such as Clarkesworld, Interzone, Alfred Hitchcock’s Mystery Magazine, Andromeda Spaceways Inflight Magazine, Lightspeed, Nightmare, AE, Chiaroscuro… and of course Theaker’s Quarterly Fiction. This is his first short story collection – the appearance of which is itself an achievement given the reluctance of publishers to take on such projects. The short story came into its own with the rise of literacy in Europe and North America during the nineteenth century, but declined dramatically with the rise of domestic television ownership during the twentieth century. In the second decade of the twenty-first century, it is easy to forget that many of the most famous speculative fiction writers – Robert A. Heinlein, Ray Bradbury, Isaac Asimov, Philip K. Dick, and even Stephen King – began their careers as writers of short fiction. The notion of supporting oneself financially by short fiction alone is already archaic and authors like David (and publications like Theaker’s Quarterly Fiction) breathe life into what might otherwise be a dying art form. I must interject a disclosure (or perhaps disclaimer) before I proceed: I met David while he was living in York and was surprised to discover that he had been kind enough to dedicate The Sign in the Moonlight and Other Stories to me in memory of the small assistance I was able to give him with the initial drafts of some of the stories. Our acquaintance has not prevented me from writing this review, however, because my primary concern is not the quality of the stories. That has already been judged by others: thirteen of the fourteen have been previously published – in Andromeda Spaceways Inflight Magazine, Nightmare, Flash Fiction Online, Necrotic Tissue, Bull Spec, Bards and Sages Quarterly, Angry Robot’s blog, and three anthologies – with “War of the Rats” appearing for the first time.

The collection makes several hard to acquire or out of print publications available again, most notably “The Facts in the Case of Algernon Whisper’s Karma” from The Willows and Spectral Press’s “The Way of the Leaves”. For this, Digital Horror Fiction (which is an imprint of the Digital Fiction Publishing Corp) should be praised, as well as for selling both the digital and paperback editions at reasonable prices. The publisher is nonetheless the target of my main criticism, which is that the paperback appears to have been deliberately extended across as many pages as possible. The font is on the large side of medium and the lines are double-spaced, so that even a work of flash fiction (the excellent “The Desert Cold”) is stretched over four pages (six if one counts the illustration). Each story has its own black and white illustration, by the talented Duncan Kay, on a verso page but the respective recto pages have been left blank and there is altogether too much white space between front and back cover. What puzzles me is that if there was a need to increase the page count – and I understand that there often is for a variety of reasons – the publisher didn’t include more of David’s stories. There are plenty to choose from – “Devilry at the Hanging Tree Inn”, published in Theaker’s Quarterly Fiction #37 (2011), to take just one example. Kay’s illustrations provide an impeccable complement to the stories, from first (“The Burning Room”) to last (“The Way of the Leaves”) with no exceptions. Where they are particularly successful is in the pictorial representation of the way in which David mixes the literary with the pulp uses of language. Kay offers David’s readers a mirror in which the pitch of each story is perfectly reflected, from the humour and self-conscious playfulness of “My Friend Fishfinger by Daisy, Aged 7” to the sophistication and seriousness of “Prisoner of Peace”. Kay has also pulled off another balancing act, revealing enough of each tale to tease his audience while expertly avoiding spoilers in a completely harmonious match between illustrator and author.

The Sign in the Moonlight and Other Stories is introduced by Adrian Tchaikovsky of Shadows of the Apt and insect-kinden fame. Commenting on the theme of the volume, he writes: “Every story here opens a door onto some human trauma: loss, grief, death, murder and madness, encounters with the horrors of the supernatural and perhaps the worse horrors that simple mundane world can inflict” (p. 2). I’m not sure whether his description is accurate. If it is meant to indicate a distinctive world-view, in the sense that S.T. Joshi takes as definitive of the weird tale as opposed to other categories of speculative fiction, then not because there is no consistent gestalt that underpins these stories. If it is meant to indicate that all of the collected stories belong to the horror rather than fantasy or science fiction genres, then Tchaikovsky is correct and whatever else they achieve, they inspire the right combination of the fear and disgust that one demands from the tale of terror traditional or contemporary. The absence of underlying world-view does not detract from the unity of the volume; one of its strengths is the way the stories criss-cross the style and substance of subdivisions within the genre – gothic romanticism, the English ghost story, and the cosmic weird to name but three. The collection is to my mind well-named: “The Sign in the Moonlight” is my favourite story, where fact and fiction combine to produce a tensely entertaining tale inspired by – rather than a slavish pastiche of – the themes explored by H.P. Lovecraft. My only disappointment is “A Twist Too Far”. The narrative is accomplished enough on its own, and was no doubt an asset to the issue of Andromeda Spaceways Inflight Magazine in which it appeared, but is eclipsed by “The Facts in the Case of Algernon Whisper’s Karma” here. The stories are quite similar and the latter is superior in both intrigue and ingenuity. A minor complaint in a collection that is a major success.
Posted by Stephen Theaker