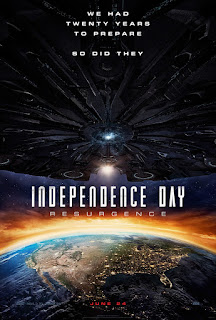 Although President Whitmore’s (Bill Pullman) rousing speech in Independence Day (1996) is clichéd and overly dramatic, people can’t help but love it. It makes them feel something.

The makers of Independence Day: Resurgence had to make sure that Whitmore gave another speech. This time, the motley, over-medicated has-been attempts to do so in an airport hangar. Music plays. People gather. At the end, David Levinson’s (Jeff Goldblum) smirk seems to say, “Yeah, nowhere near as good as your first one.” Such is the sentiment that summarizes this film.

Independence Day, though far from a masterpiece, gained many fans. It showed nations uniting for a common cause. It revealed Will Smith’s emerging talent. It gave us the zaniness of Dr Brackish Okun, as well as Whitmore’s “Nuke ‘em. Let’s nuke the bastards.” It even started this whole monument destruction thing.

Roland Emmerich returns to direct a Smith-less (and witless) sequel that tries too hard to be like its predecessor. Major characters make sacrifices that fizzle, excessive pilot whooping gets annoying, skies filled with aircraft and lasers grow tedious, and attempts to stir emotion fall flat. In fact, the big idea of this film (i.e. aliens attack Earth, humans fight back) duplicates that of the first. Why even make this sequel?

It’s easy to see very early in the film why critics ripped this one apart: shallow characters, sub-par to abysmal acting, and expository dialogue.

Since this is an event movie, it presents no clearly defined protagonist. Instead, we are left with a stumbling cast of new characters, including dull pilots, a not-so-funny comic relief, Whitmore’s forgettable daughter, a sabre-wielding, scowling African warlord whose attempts at drama are laughable, and a psychiatrist who specializes in alien mind control. Then there are all the returning characters stuffed into the film.

The raggedy Dr Brackish Okun (Brent Spiner), who springs up after a 20-year coma with his mind teeming with alien formulae, is another favorite. However, even his maniacal approach doesn’t have the same oomph as it did in Independence Day. Okun does manage to pull off the film’s one scene that transfers emotion to the viewer.

Where are the filmmakers trying to go with this movie? Are they trying to be silly-serious in the vein of Ghost Rider (2007)? They don’t succeed. Are they trying to tap into viewers’ emotions? They’re way off base: the film has too many palm-slapped-against-forehead failed attempts to wring out emotion. Ultimately, Independence Day: Resurgence, hovering somewhere between sci-fi drama and comedy, doesn’t know what it wants to be.