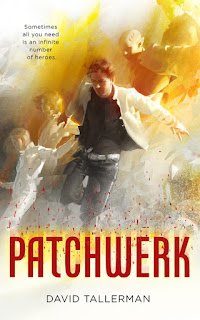 Scientist Dran Florrian has sneaked on to the TransContinental, in the cargo hold of which is his great invention, Palimpsest. The result of five years of work and a lifetime of thought, it is too powerful to be in the hands of a ruthless weapons man like Harlan Dorric, who is waiting for him in the hold. Also there, two hired guns, a technician who blocks Florrian’s neural connection to his clever machine, and Karen, the wife he lost while buried in work. Hang on, no, that’s not right. He’s D’ren Florein, on a queenship, an intelligent insect trying to counter the Nachtswarm, entomological engineering gone mad, and Halann D’rik is the one trying to take control of Palimpsest. No, wait, that’s not right either… This is a good novella that could easily have sprung from one of the Baen collections of classic science fiction by Poul Anderson or Murray Leinster, but instead it’s from David Tallerman, one of our own past contributors. He thinks up lots of neat tricks for the protagonist, whatever his name at any given time, to play with the Palimpsest, weaving a sharp little thriller through the middle of it. So far, the Tor.com line of ebook novellas is living up to expectations, and my expectations were high. ***
Posted by Stephen Theaker