The Legend of Tarzan | review by Douglas J. Ogurek 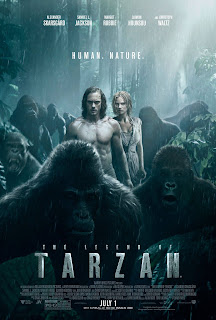 Whether you’ve confronted Tarzan in a comic book, a Disney cartoon, or Edgar Rice Burroughs’ novels, chances are you don’t envision the iconic jungle-dwelling adventurer as a tea drinker.

However, sipping tea among British diplomats is exactly what the now civilized hero (Alexander Skarsgård) is doing when we meet him in The Legend of Tarzan, directed by David Yates. The man raised by apes wants his colleagues to address him not as Tarzan, but rather as John Clayton III, Lord of Greystoke. But that’s not what we viewers want!

So comes the call to adventure. Tarzan sets out to his motherland, the African Congo, with wife Jane (Margot Robbie) and gun slinger George Washington Williams (Samuel L. Jackson) to save his countrymen from slavery at the hand of Belgium’s King Leopold, who’s exploiting the land for his own gain.

Unbeknownst to Tarzan, Leopold’s chief envoy Leon Rom, masterfully played by Christoph Waltz, has promised Chief Mbonga (Djimon Hounsou) that he will deliver Tarzan in exchange for the coveted diamonds of Opar. To up his odds, Rom captures Jane to lure Tarzan. Thus begins our ultra-ripped hero’s swinging, hollering, brawling quest punctuated by flashbacks to his jungle upbringing.

If you’re a huge fan of Mad Max: Fury Road (2015) type nonstop zany action, then The Legend of Tarzan probably isn’t for you. However, if you approach this film with the same patience and reverence with which Tarzan approaches a cup of tea (or a lion), then you can walk away more than satisfied. Tarzan is, at its core, a damsel in distress story that shows the lengths to which an alpha male will go to save his mate (and his friends). It offers a sufficient dose of action including jungle acrobatics, battling troops and tribes, and attempting to escape the jungle’s deadliest creatures. Tarzan even takes on his gorilla brother in an attempt to regain his standing within the band. Sure, the film is rife with Hollywoodisms – watch for a gorilla waving on a herd of stampeding wildebeests – but isn’t that part of the Tarzan charm?

The film’s true strength lies more in its devotion to setting. The Legend of Tarzan is, above all, a milieu story about exploring a world much different than ours. This Tarzan isn’t an eccentric or complicated guy, but then again, he never was. Tarzan and the jungle are indelibly linked, and this film shows that relationship in his interactions with the natives and with the majestic creatures that today hover on the brink of extinction.

Another strength is the always entertaining Christoph Waltz, who tones down his typical verbosity with a more reserved Leon Rom. Though his panama suit and hat and the rosary he constantly clutches suggest a pious individual, Rom is anything but. He uses that rosary, made of super strong material, to strangle those who stand in his way.

Despite the outdoors focus, the film’s most entertaining scene occurs in the dining quarters of Rom’s boat, where we get to see Waltz in his element… table talk, that is (see Inglorious Basterds (2009) or Django Unchained (2012) for shining examples). Here Rom attempts to host a cordial meal with his captive Jane. While his outward civility masks his true intent of testing Jane, Rom’s facial expressions, smiles, diction, and attentiveness to his guest serve up a delicacy at this cinematic feast. He even reaches over the table to reposition one of Jane’s utensils on her plate after she leaves.

Comedy relief sidekicks have the potential to be annoying, but Samuel L. Jackson makes it work as George Washington Williams. Williams spends most of this film trying to keep up with the hero, expressing shock, and commenting on Tarzan’s abilities. It’s as if he’s nudging the viewer and saying, “Can you believe this guy?”

Tarzan swings through the jungle. He cuddles with lions. He takes on gorillas and small armies. That is hard to believe. It’s also the stuff of legends. – Douglas J. Ogurek *****
Posted by Douglas J. Ogurek