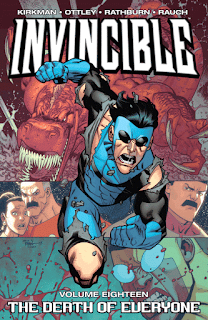 Mark Grayson, aka Invincible, is an extremely strong and durable (albeit not indestructible) superhero who inherited his powers from his father, an alien who was originally hanging around on Earth with a view to making it a part of his people’s empire. As this volume begins, Invincible’s powers are on the blink, and Zandale, the hero formerly known as Bulletproof, has been keeping his costume warm. But Zandale is about to make the mistake of telling his parents his astonishing origin story, and Mark will discover that sometime ally, more often enemy Dinosaurus has been making big plans. It’s a shocking book from start to finish, as you might expect from the collection that spans this comic’s hundredth issue. That’s one of the things I love about this comic, its scope for telling those huge stories: it’s as if Crisis on Infinite Earths, Civil War, Infinite Crisis, The Death of Superman and Zero Hour all happened in the same ongoing series. The status quo can be completely upended in Invincible – and in this volume it does, a good half dozen times – without concern for the effect upon twenty other books that feature the same character. This isn’t the remixed version of a story I’ve read three times already, and when Mark’s friends are in danger there’s every chance that they could really die. That’s why I’m up to volume eighteen of this when I haven’t even reached issue eighteen of a new DC or Marvel universe book in years. Stephen Theaker ***
Posted by Stephen Theaker