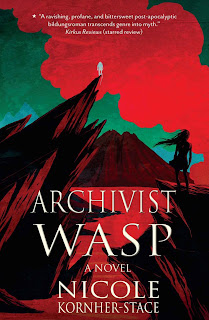 It is a truth universally acknowledged that the best way to begin a novel is with a fight to the death, and that is how this novel begins. Wasp is the current archivist, her job being to capture ghosts and record what information she can glean from them. This miserable and lonely existence has a downside: each year she is challenged by three upstarts to a knife fight. If one of them wins, they’ll become the archivist, and she’ll become a ghost. If she wins, she has to tie a braid of their hair into her own, making her head heavier by the year, giving her headaches, making it more likely that she will lose to the children.

Wasp is sixteen years old, and doesn’t expect to live much longer. However, she survives the book’s opening duel, just barely, and after a period of convalescence returns to the job. A very strong ghost appears, one who can harm her, speak to her, even heal her bad ankle, and he wants her to come with him to where the ghosts live, in search of a woman he loved in life, and has never been able to find in death.

Good mysteries and good fights are two things I really like in a book, and Archivist Wasp delivers in both respects. Wasp is resilient and resourceful, and likely to win the admiration of all readers, not to mention their sympathy, and the same goes for her ghost, whose pre-apocalyptic story is not quite what I was expecting. Another terrific title from Small Beer Press, and clearly an author to look out for too. ****
Posted by Stephen Theaker