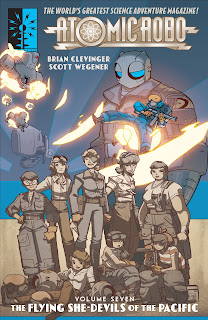 Atomic Robo is a cool guy created by Nikolai Tesla, who he calls his dad. He is atomic-powered, generally good-natured, and likes a fight. He’s strong, wry, almost indestructible, and each graphic novel (or mini-series, in their original publication) takes us to a different period of his life, with different friends and colleagues, previous highlights including battles with giant Nazi robots and cthulhoid monsters. If that sounds a lot like Hellboy, that’s because it is a lot like Hellboy – but with blue skies and daylight. Book seven begins with him flying an experimental plane in 1952, and under attack by weird little flying tanks. Not having any weapons and badly outnumbered, he gets shot down and would be destroyed were it not for a squadron of rocket-women. They kept fighting in the Pacific rather than going home to countries where they’d have to hang up their bomber jackets, their enemies mostly mercenaries, but now there’s a bigger threat, and they’re going to need Atomic Robo’s help to stop it. The previous six Atomic Robo books were all very good, and given that this is once again from the same writer and artist it isn’t a surprise that this is too. A few panels left me puzzling a little over what was going on, but when I dawdled it was more often to take it all in. The rectangular panels make it ideal for reading on a tablet. Reading one one Atomic Robo book always makes me want to read all of them again. The only sad thing is that the skipping about in time means we’re not likely to meet the she-devils again for a while, a shame because they’re rather brilliant. Stephen Theaker ****
Posted by Stephen Theaker