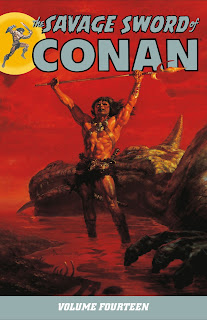 This reviewer has read several volumes in this series over the last year or so, and this review could pretty much apply to any of them, since The Savage Sword of Conan the Barbarian was a remarkably consistent magazine. Whichever collection you pick up, you’ll get the same black-and-white mix of a rough but honourable barbarian, extremely attractive women (variously good and evil), mad wizards and kings, and reliably good storytelling and art – all for a bargain price. One improvement is that by the issues collected here, 141 to 150, the black caption boxes that made the earliest books rather a pest to read are long gone, and the creative team of Dixon, Kwapisz and Chan have settled in for a run of consecutive issues that tell a series of consecutive stories in Conan’s life. As ever, each individual story, whether it is teaming up with Red Sonja on a quest for a hidden idol, defending a fort from a Pictish attack, or a struggle in Brythunia to prevent the rising of Oranah, the Stag God, who drives farmers mad with murderlust, has the length and heft of a French album, but this time they also add up to more, a grand saga that takes Conan from a gladiator to a general and beyond. One story, “Blind Vengeance”, features a firm but unfair tyrant who intimidates villagers into handing over their goods, and carves a W into the foreheads of corpses – an inspiration for Negan on The Walking Dead, perhaps? The speech balloon placement is a bit careless, with the correct reading order often counterintuitive and confusing, but the artwork is nearly always top notch, and unusually for a Comixology edition double page spreads are presented as two separate pages, which makes it much easier to read on a tablet. Recommended to anyone who liked any of the other volumes. ****
Posted by Stephen Theaker