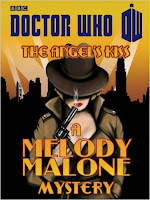 River Song is in New York, working as a private eye under the name Melody Malone, just as we found her at the beginning of the television episode, “The Angels Take Manhattan”. She takes the case of a minor film star, Rock Railton, who has overheard someone saying that he will die. Then she runs into a fellow who looks like him on the street, dying, and extremely old. At a party she meets him again, young and beautiful but without the slightest idea who she is. Weird stuff is going on and she wants to figure it out whether she gets paid or not. This short book, written in truth by Justin Richards, doesn’t match the passages quoted from it on television, sadly, but it does lead nicely into that story, and it gives River Song a lot of fun things to say and do. The audio version, read by Alex Kingston herself, must be a hoot. Stephen Theaker ***
Posted by Stephen Theaker