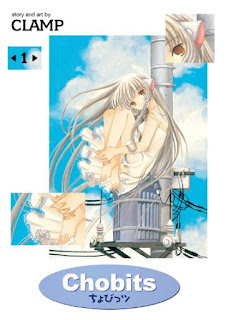 Hideki is a college kid who is trying to get into Tokyo university, and he doesn’t have a lot of money. He certainly can’t afford a persocom, a human-shaped computer, so it seems like a stroke of luck when he finds one that’s apparently been thrown out with the trash. She seems to be in good condition, and is, incidentally, very pretty, though Hideki is more focused on spreadsheets, word processing and household accounting (by all of which he means pornography). As he carries her off, a disk falls out, and maybe this is why she has no memories, and not even an operating system. He names her Chi, because at first that’s all she says. She’s a blank slate for Hideki’s lessons, and since he’s a buffoon that doesn’t go well; she ends up unwittingly working for a short spell at a strip club. As the endless pages fly by, she seems to develop feelings for him, while he does for her, even as he is told by himself and others that she’s a machine and such feelings are a waste. Would he be better off spending his time with Yumi Omura, a peppy student with a crush on him? Then there’s Takako Shimizu, a college tutor who turns up at his house for an impromptu sleepover, and Chitose Hibiya, his beautiful landlady, who is keeping a couple of big secrets, and knows a few about Chi, who might be one of the fabled Chobits, persocoms that can learn for themselves. Although this manga translation is presented in the now-traditional right-to-left format, the limited amount of dialogue per page stops it from being too confusing to read. The backgrounds are plain, as little art as possible being used to fill each page – the printing costs that have shaped US comics so much were presumably less of an issue as comics developed in Japan. I’ve never before read a book so long in which so little happens. It only took a couple of hours to read, despite being 740pp long. (This explains those fifteen-year-old Goodreads users with thousands of books read.) The “sexy” elements of it tend to be a bit gross, especially in retrospect after we’re told late in the book the apparent age of Chi’s physical body. It has some interesting ideas about how easily humans would switch their affections to such androids, sidestepping the problems and complexities of human romance. It’s undemanding, occasionally amusing, a bit pompous, and it kept me busy while I drank a cup of tea; if volume two comes up in a sale I might possibly buy it, but otherwise I’d be happy to leave Hideki to perv over his personal computer in private. Stephen Theaker ***
Posted by Stephen Theaker