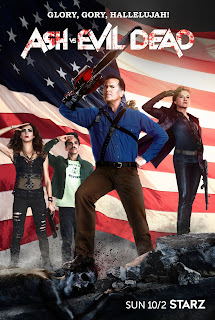 This is how you make a second season. It takes everything that was right about the first season – Ash the selfish jerk, buckets of blood, a teenagerish desire to shock, and an anything goes sensibility – and turns up the dial on all of it as far as it will go, then breaks the dial off, jams its own fingers into the hole where the dial used to be, and twists it even further. This reviewer and his night-time television buddy were constantly looking at each other in amazement, slapping our knees, and letting out howls at the grossness. It even led to a falling-out at one point when your reviewer was told to stop laughing so loud because it was going to stop the children sleeping, even though the thing on screen was probably the single funniest thing this reviewer had ever seen in his life.

After the events of season one, Ash and his two pals are living life large in a beach party town, but it won’t last, and soon they are on their way back to where it all started: Ash’s home town, and the original cabin in the woods. Ash meets his dad again, and his dad is played by Lee Majors. Episodes still last for half an hour, and there’s even less filler this season, each part trying to top the blood, gore and ridiculous over-the-topitude of the one that came before – and largely succeeding. My one criticism: I’m still not a fan of the gendered language thrown at women when possessed by the evil dead – apart from not enjoying those terms being used by the heroes, it doesn’t make any sense, because it’s not the women who are evil, it’s the monsters possessing them. It feels like a slander on someone who has already been unfortunate enough to die horribly. ****