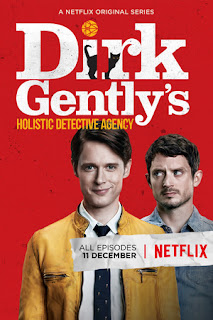 Elijah Wood plays a hotel busboy, Todd Brotzman, who discovers a bloodbath in a hotel room, just after apparently seeing himself (in pretty bad shape) in a corridor. He loses his job, but the universe seems to give him a new one, whether he wants it or not, as the assistant to Dirk Gently (Samuel Barnett – Renfield from Penny Dreadful, not I would ever have realised that without the help of the IMDB), a detective who doesn’t rely on evidence so much as the fundamental interconnectedness of all things. The story involves an equally holistic assassin, the Rowdy Three (all four of them), two police officers, the FBI, the CIA, and Todd’s sister, whose illness causes her to have hallucinations. Her brother’s recovery gives her hope, but all the nonsense that’s going on would be enough to make anyone doubt their grasp on reality. It’s a long time since I read the two novels, but this seems from a reference to a sofa and Thor to be loosely a sequel to them. The first Dirk Gently novel grew out of what was once the unused script for Shada, and here Dirk Gently is very explicitly Doctor Whoish. He’s a bit more useless and self-doubting than the Doctor, but you could put most of his dialogue in Tom Baker or David Tennant’s mouth without it sounding at all odd, or at least, without it sounding any odder. I thought this was brilliant, a total delight, an unfathomably successful cross between Who and Fargo (the series), with perhaps a dash of Psych. Every change of scene takes us to a great character. Fiona Dourif is particularly spectacular as Bart Curlish, the holistic assassin who believes that the universe sends her to the people that she needs to kill, but has never slept in a hotel room or used a shower. If her father Brad Dourif ever retires from being cinema’s favourite psychopath, there’s no need to worry: the family business is in good hands. Jade Eshete is also terrific as Farah Black, a private security operative who is trying to rescue her old boss’s daughter. If the show has any flaw at all, it’s that it has a slight case of what I call Hellboyitis (after the first film), where we seem to spend less time with the title character than with the chap who has just entered his world, but Elijah Wood is so likeable, even playing a bit of a jerk, that you can never resent the programme focusing on him. After the madness is over, just as the programme seems ready to settle into being Psych, it gets even better: the ending barges in and sets up season two very nicely. I would never have expected to be cheering just because someone was holding a rock, but that’s where this excellent show takes you. *****
Posted by Stephen Theaker