The Very Best of Kate Elliott | review by Stephen Theaker 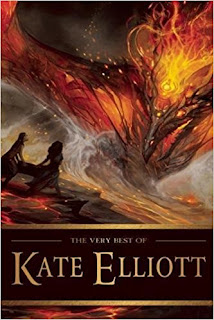 This excellent book is currently available as part of a Tachyon Humble Bundle, which includes several other books that went down very well here at TQF Towers, such as Pirate Utopia by Bruce Sterling, Yesterday's Kin by Nancy Kress and Slow Bullets by Alastair Reynolds.

Short stories don’t seem to have played a major part in Kate Elliott’s career. The twelve collected in The Very Best of Kate Elliott (Tachyon Publications pb, 384pp, $15.95) include all her published stories; none appeared in magazines; all are from anthologies or previously unpublished. She’s had twice that number of novels published, so it’s a fair bet that in truth her very best work lies there. And yet no reader would guess that from how good these stories all are. The book also includes four essays and an introduction, “The Landscape That Surrounds Us”, which sets out an explicit agenda.

She aims to write fantasy and science fiction stories about female characters, “to build landscapes of possibility and expansion”, to challenge “received wisdom, of ossified expectation, and of unchallenged assumptions”. The book is full of characters who do this. Like Eili, in “Making the World Live Again”, who wants to see the world, and persuades her family to let her go to the big temple in Eridu instead of accepting the offer of six sheep and a brindled ox from a suitor’s family. Now she’s a woman she will get her chance to take the priestess’s test, and then learn how the world really turns.

This isn’t a book of Red Sonjas; more often these stories show female courage as an everyday part of living in a male-dominated world. As in “With God to Guard Her”, where young Merofled takes the fancy of the Duke Amalo, who sends his servants to seize Merofled “like a sack of grain”. They bring her to his bed to “accept the honor of the Duke’s attention”. Where classic fairy tales like “The Princess and the Frog” or “Beauty and the Beast” advise women to accept unwelcome marriages, Elliot’s story shames men who would abuse their power. In “On the Dying Winds of the Old Year and the Birthing Winds of the New”, a queen who left her king is watched by his spies; any man she sleeps with will be killed.

Elliott’s women are never passive, even if their actions might be forgotten or elided by the grand sweep of history, like those of Anna, the brave hero of “Leaf and Branch and Grass and Vine”. A general loyal to the king lies injured, and she must take word of the treachery to the king’s sister; her age lets her pass by enemy soldiers unmolested. Sometimes their actions are subtle but the effects are great, as in “The Queen’s Garden”, where cloistered Princess An and Princess Yara bring down a king with a handful of short, exquisite notes.

Though settings range from the fantastical pre-Roman to the far future, all show determined women getting important things done in difficult situations. Cannons bombard the city of Trient in “The Memory of Peace”; children like Stepha loot the ruins for food. In “A Simple Act of Kindness”, Daniella, out in a storm at twilight to collect a lost black sheep, encounters twelve whispering, dark shapes; they hunt a stranger hiding in the village church. Daniella volunteered to find the sheep in part to avoid sexual harassment from her cousin Robert, in part because she likes storms.

The common thread in the four essays is we should all try a little bit harder. “The Omniscient Breasts: The Male Gaze through Female Eyes” draws attention to fiction that drifts from the limited third person perspective to omniscience when the author wants the reader to ogle his female characters. “The Status Quo Does Not Need World Building” defends “obsessive world-building” against the criticism of Damien Walter, arguing that the creation of detailed fantasy and science fiction worlds prevents writers and readers from assuming that the status quo applies.

“And Pharaoh’s Heart Hardened” pleads for tolerance, arguing that the diversity of immigration makes the USA strong, while “The Narrative of Women in Fear and Pain” explains how much Elliott is creeped out by Hollywood “scenes of young women in poses of sexual passivity being terrified and mutilated and screaming screaming screaming”. But she says that “there is an important and even vital place in our literature (books, films, etc.) for strong, fearless depictions of suffering and injustice, so we don’t lose sight of what we must strive to change”.

We see that throughout this collection. Mary hangs in a cage at “The Gates of Joriun”, her own name almost forgotten, her brother is the rightful king. We see how she keeps it together, to lend the strength of her endurance to her brother’s cause: “Let me not weaken. It is so hard.” Kereka, in “Riding the Shore of the River of Death”, wants to be a warrior not a wife, and so goes in hunt of a head, only to find herself the captive of a wizard; she ends up taking a mad risk for a chance at freedom.

A couple of stories are funny, making it clear that the absence of humour elsewhere is just a matter of maintaining an appropriately serious mood. The sunniest story in the book is “To Be a Man”, a sex comedy about Felicia and Ami, who shelter and bathe Rory Barr, the handsome were-sabre-toothed-cat who ate their lady’s nasty little pug, Coco. “My Voice Is in My Sword” is comedic sf, about actors on a brief tour to an alien planet, performing the Scottish play with a pair of big stars on board, one of whom takes advantage of his position to grope his castmates in character.

The two sf stories in the book were among my favourites. The other is “Sunseeker”, in which a bunch of spoiled rich kids who circle the world on a promotional jaunt are snatched. One of them manages to flee, but ends up in the hands of commercial pirates with a grudge. As ever, the fortitude of the protagonist is uplifting, and her pride: Eleanor has refused to remove the birthmark on her cheek, a rebuke to a father who cares about celebrity and career more than his daughter.

This author’s agenda doesn’t lead to didactic, hectoring stories, but to stories with variety, high stakes, interesting perspectives, and different pleasures. Strength isn’t just slaying enemies with a broadsword; it can mean saying no to powerful men and women, or to a society that stands against you. Elliott’s characters dominate the pages, and live on when the stories are over. If this were the best of collection by an author who had published five hundred short stories you wouldn’t expect it to be any better.