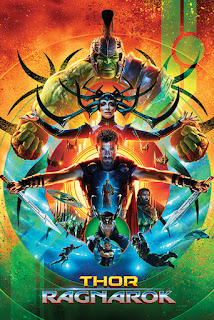 Slugfests, humour, otherworldly settings, eccentric characters. What more could you ask for?

Recent Star Wars and Transformers films are way too dramatic and way too serious. Think about it – a grand declaration to “fulfill … your … destiny” from a creature whose face looks like a pool of vomit? Conversely, films in the Avengers universe continue to have fun with their own ridiculousness. The visually spectacular comic action/adventure Thor: Ragnarok, directed by Taika Waititi, stays true to this strategy.

The demon Surtur – think of a gigantic flaming Satan – plans to initiate Ragnarok, which is basically the apocalypse-like annihilation of Thor (Chris Hemsworth), brother Loki (Tom Hiddleston), and father Odin (Anthony Hopkins), along with the rest of Asgard’s inhabitants. But there’s a more immediate threat: Odin’s eldest child Hela (aka the Goddess of Death) wants to take over Asgard. Meanwhile, Thor is stuck with the untrustworthy Loki and the short-fused Hulk on Sakaar, a planet that is part garbage dump, part toy store. He needs to find a way to get back to Asgard and stop Hela.

In this film, the third in the Thor series, humor is as abundant as the God of Thunder’s muscles. For instance, a hero makes a heroic comment, then attempts a heroic action that results in a decidedly unheroic accident. An imposing stone warrior talks in a matter-of-fact, high-pitched voice. Thor and his brother Loki resort to an underhanded fighting strategy that they call “get help”.

The film’s fight scenes adhere to Marvel’s high standards. Thor takes on the Hulk in a gladiator-style showdown, plus there are several exhilarating battles in which heroes and villains mow down opposing armies. Particularly entertaining are Thor’s massacres accompanied by Led Zeppelin’s “Immigrant Song” (which references Norse mythology).

Antagonists are equally enjoyable. Cate Blanchett’s Hela is a smooth, ultra-confident supervillain. Her perfect diction and poise contrast with Jeff Goldblum’s characteristically Goldblumian Grandmaster, captor of Thor. The chatty, golden-robed leader of Sakaar incorrectly labels Thor “Lord of Thunder”, pits him against the Hulk, kills captives with a “melt stick”, and breaks away from a conversation to play synthesizer in a jazzy jam session. “Hey, Sparkles,” he says to Thor, “here’s the deal: you want to get back to ass-place, ass-berg, wherever you came from…?” “ASGARD!” retorts Thor.

A building-size projection of Goldblum gesticulating and speaking in his stilted style jars with our notion of what a villain should be – severe, eloquent. Goldblum, like many elements of this film, does not fit in a presumably sombre world of Norse gods. Perhaps that is why Thor: Ragnarok is so effective. – Douglas J. Ogurek *****