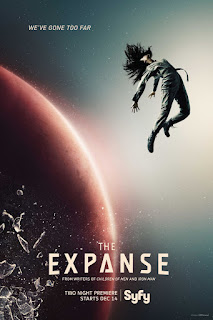 James S.A. Corey’s novel Leviathan Wakes was one of the first books I ever requested from NetGalley, back in 2011, but I never got around to reading it. This excellent television version suggests that was a big mistake. As the series begins, humans have not yet left the solar system, so far as we know. There is a good deal of tension between Earth, Mars and those who live further out. Julie Mao, a young woman with connections to the Outer Planets Alliance, has gone missing, and a freighter is attacked while investigating what we know to be the ship she was on. Our protagonists are a group from the freighter who survive, led by James Holden and Naomi Nagata, trying to find out what happened and why, and a cop on Ceres, Joe Miller, played by Thomas Jane, who also has a very groovy haircut, and has been hired to investigate the young woman’s disappearance. It may not be a surprise to discover that there is a lot of shady stuff going on, but that’s not to say there aren’t plenty of surprises. This is a proper science fiction television series with a really good series-length plot that feels perfectly paced and still makes each episode feel like a significant chapter in the story. The effects are at times absolutely excellent, and never less than needed to tell the story clearly. The cast is excellent, and seem to be taking it all very seriously. I’m very much looking forward to season two. ****