iZombie, Season 2, by Rob Thomas and chums (The CW/Netflix) | review by Stephen Theaker 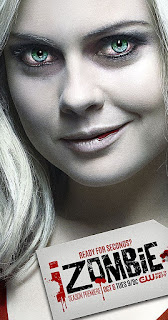 Liv Moore is a zombie, after being scratched by one at a really wild boat party a couple of minutes into season one. Luckily she won’t go “full Romero”, as they call it here, as long as she keeps snacking on brains. Since the brains work just as well if the owner is already dead, she got a job in a morgue, where she works with lovable Englishman Ravi Chakrabarti (Rahul Kohli), who soon learnt her secret and began to work on finding a cure. In season two Liv continues to use her brain-visions to solve murders with Clive Babineaux (Malcolm Goodwin), a grumpy detective. What she doesn’t know is that Vaughn Du Clark (Steven Weber), the owner of Max Rager, the energy drink involved in kicking off the original zombie freakout on the boat, is experimenting on zombies and has ensnared someone close to Liv… At nineteen episodes this series is perhaps a bit longer than it needs to be (season one was a tidy thirteen), and having a couple of arch-enemies in the main cast means that (like the second season of Terminator: The Sarah Connor Chronicles) we check in with them very frequently, even though the meat of the programme isn’t the ongoing arc, it’s the stories of the week, where the humour of Liv dealing with her new brain-given personalities make it come close to being the replacement for Psych that I really, really want. This season includes episodes where she eats the brains of a fraternity brother, a real-world vigilante, a librarian who writes erotic fiction, and a country singer, always with amusing consequences. The funnier it is, the more I like it. ***
Posted by Stephen Theaker