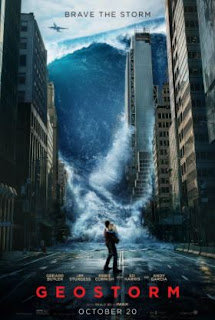 Gerard Butler’s presence in a film may be, for some, a red flag. For me, it’s a draw – typically, Butler plays an aggressive type who doesn’t take crap from anyone. In Geostorm, he sticks to his calling card as tough guy American scientist Jake Lawson.

Jake invents and oversees Dutch Boy, a space-based system that controls weather and prevents natural catastrophes. Then Jake’s younger brother Max, a politician with close ties to the US President, fires Jake from his job as director of his own invention. Three years later, when Dutch Boy starts to malfunction and kill people, Max convinces Jake to head back up to the space station and solve the problem.

The remainder of the film is a race against time to determine what went wrong and who is responsible. Amid the tempest that is Geostorm are political intrigues, familial conflict, ticking time clocks, close calls in outer space, and, the reason why most come to see this film: mass destruction.

The poster for this film leads one to believe that Butler will be earthbound… running around with his daughter to avoid destruction in the vein of 2012 (2009) or The Day After Tomorrow (2004). Rather, Geostorm differentiates itself by not only adding the mystery element, but also by sending its protagonist to a space satellite for most of the film.

Critical rails against this film range from tepid catastrophes to a lack of sophistication. In the case of the former, perhaps they missed the firestorms and refrigerator-sized hailstones. They also miss the mockery, intended or not, embedded in the film. Geostorm pokes fun at a market flooded by large-scale destruction wreaked by aliens, weather, superheroes, and robots. It’s as if the directors consulted with schoolboys to take it to the next level. The acting follows suit – some of it is so bad that it appears to be read off a script. Then there’s the tough guy mentality that permeates the film. President Andrew Palma (Andy Garcia) acts like a mob boss, his right-hand man Leonard Dekkom (Ed Harris) has a hardass demeanor, and when Butler’s gruff Jake Lawson isn’t leading an international team of scientists, he’s drinking brewskis and fixing muscle car engines.

I read somewhere that the traditional hero (e.g. a Gerard Butler character) is no longer believable. That may be true, but when the shitstorm hits, that traditional hero sure can be entertaining. Next time your brain is fried on a Friday night, crack open a beer, grab some chips, and pop on Geostorm. – Douglas J. Ogurek ****