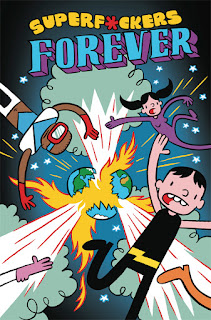 A five-issue miniseries of the utmost puerility, this is very entertaining. The Superf*ckers are a Legion of Super-Heroes-esque gang of teenagers who live inside a club house and act like complete idiots. Even Vortex, who fixes up the universe every time the others destroy it, is willing to lie down on a sofa that has just been peed on by his colleagues Jack Krak the Motherfucker and Ultra Richard (it’s better than weeing in the toilet, they decide, because you never have to clean it). The skull possessed by interdimensional super-villain Omnizod shows up, first getting turned into a lamp by stinky Grotessa, then encouraging Princess Sunshine down a megalomaniacal path. Orange Lightning is jonesing for his next fix of Grotus’s slime, Computer Fist is struggling to get his robot fists working properly, and team leader Superdan returns from Dimension Zero just in time to lead a pointless new mission into Dimension Zero. The stories are sweary, rude and gross, and all the better for it. Kochalka’s artwork is as brilliantly characterful as ever, while a series of backups by other creators show that these heroes look just as silly through their eyes. The entire series can be read in under an hour, but what a great way to spend an hour. ****
Posted by Stephen Theaker