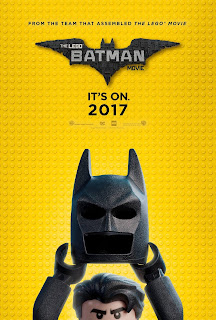 Lego Batman was one of the funniest things about The Lego Movie, against strong competition, and the three Lego Batman games were all terrifically successful (and great fun to play), so it’s no surprise to see him back in a film of his own. It doesn’t refer back to his adventures in the previous film, but Batman is still a master builder who knows that he is made of Lego and can rebuild and reshape the world around him at high speed. This is in addition to his usual Bat-powers: money, gadgets, fighting skills, acrobatics, and (in these films at least) the ability to shred on the electric guitar. For all his success, though, he’s very lonely, and this really comes to a head when Commissioner Gordon announces his retirement. Barbara Gordon (Rosario Dawson) is going to take over, having cleaned up Bludhaven (this is a film made by people who have paid attention to the comics), and she’s not so keen on vigilantes. Batman also upsets the Joker, by denying the two-way nature of their relationship, and that inspires the Joker to team up with some of the greatest villains of all time, some of them (not giving away any spoilers, because the identity of these villains was a wonderful surprise for those of us who didn’t know in advance) British. A daughter of mine described this as one of the best films she has ever seen at the cinema, and it’s hard to deny that it’s a great deal of fun. Batman himself gets a little less funny as the film goes on and, as so often happens with comedies, the plot kicks in, but his brand new Robin Dick Grayson more than makes up for that, and that the two of them are played by Will Arnett and Michael Cera (a.k.a. Job and his nephew George Michael from Arrested Development), only adds to the enjoyment, as do many references to Bat-stories of old, including the Adam West film. The animation is gob-smackingly detailed, with dozens if not hundreds of characters on the screen at the same time, the cast excellent, and the script very funny, not at all the mess you would expect from a film with five credited writers. So much about this film made me happy, and a lot of it I wouldn’t want to give away, but part of it is that Billy Dee Williams, who played Harvey Dent in Tim Burton’s Batman and Batman Returns, finally played Two-Face. It’s not the best Batman film there’s ever been, but it might be the best one not directed by Christopher Nolan. ****
Posted by Stephen Theaker