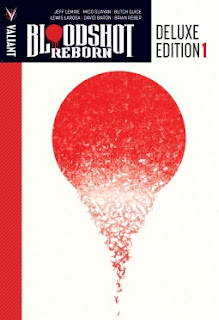 “Who was Bloodshot?” asks the first page of this comic. “Red Eyes. White skin. Guns… Lots of guns.” He was a vicious, psychopathic killer manipulated by false memory implants, working for the government, presumably in previous Bloodshot comics, but that’s all over now. At some point before this book begins he gave up his powers (regeneration, strength, aiming – basically Wolverine plus the Punisher) with the help of a woman he loved called Kay. That restored his humanity, but Kay didn’t survive, and now, six months later, he’s trying to keep calm and stay under the radar while working at a motel. Unfortunately, the nanites that provided his abilities are now taking over other people, civilians who aren’t equipped to handle them, and they are going on murderous rampages. His conscience gives him no option but to travel across the country recovering them, because at least he would be able to keep the nanites under control, but will it mean giving up his humanity once again? It’s the archetypal story of the superhero who wanted to give up the powers that were ruining his life, but can’t escape his sense of responsibility once they are gone. After that adventure is over, there’s then there’s an Old Man Loganish story set in a Mad Maxish future, where he teams up with other surviving Valiant heroes, which will probably be a treat for fans of those characters. Overall, I thought the book was a good read without being outstanding. It’s as well-written as Trillium by the same writer, and there are plenty of ideas, it’s just that it’s about a character who doesn’t massively appeal to me, and probably isn’t intended to. ***
Posted by Stephen Theaker