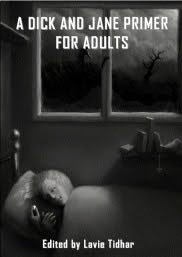 I was hoping this anthology would take a more formal approach, so I was a tiny bit disappointed with it as a whole. Nevertheless, many of the individual stories are interesting. The stories fall into two main camps, with some having a foot in both: adult stories written in the style of children’s books, and grown-up stories about Dick and Jane themselves.

I’d never heard of Dick and Jane before, but they’re the American equivalent of Peter and Jane (making them a slightly odd choice of subject for a publication only available to members of the British Fantasy Society); a foreword to put the stories in context would have been useful.

Writing a vocabulary-controlled book for children is a particular kind of exercise – the early books in the Peter and Jane series, for example, only introduce one or two new words per page. In this book none of the writers try to write with a controlled, cumulative vocabulary. The linguistic references to the original texts tend to be just to the easily parodied surface elements – e.g. see Jane run – rather than trying to emulate their structures, and working within them, which might have been more subversive. It’s a bit like producing a book of adult nursery rhymes that don’t rhyme or scan. It’s not wrong, just not quite as interesting as it might have been. Admittedly, a more formal approach might have led to much duller stories!

A lot too has been lost by printing it like a normal, adult book, in a small font with ordinary typesetting, with ordinary (if slightly inconsistent) punctuation. It works for the adult stories of Dick and Jane, but it would have added much to the power of the pseudo-children’s stories if they had appeared in a format reproducing that of a children’s book – i.e. a large font, just a few lines per page, no quote marks around dialogue (in the very simple stories), etc. Obviously all those extra pages would have added a lot to the cost of printing, but it’s nice to imagine this as a thicker book, with the artwork (by John Keates, which is very good indeed) used for fake covers in between the stories, taking us through an imaginary reading scheme.

One of my favourite stories from the collection was “Somewhere in the Street” by Ed Clayton. The strange, controlled dialogue of characters like Peter and Jane makes them sound half-crazy even in real children’s books, so it’s not a leap to imagine them as fully psychotic, something Clayton does very well. For an example of such dialogue from the real Peter and Jane, see the chilling scene on pages 24 to 27 of Key Words 2a: “Here are Peter and Jane. Peter has some water. Here you are, Jane, he says. Here you are, Jane, says Peter. Here you are. This is for you. Here is some water for you.” The picture shows Peter pouring water over Jane’s head while she screams…

I enjoyed all the stories individually, but two others I liked in particular were “The Hushes” by Conrad Williams, which was very well written if a bit tangential to the anthology, and “We Go Down to the Woods Today” by Marion Arnott, which reads much like a Ladybird book written by Stephen King.