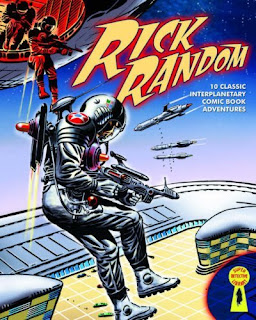 This book contains ten adventures of Rick Random, Space Detective (a character I hadn’t previously heard of) from the pages of the Super Detective Library of comic books, digests similar in style to Commando and Starblazer. It contains issues 44, 49, 123, 127, 129, 133, 137, 143, 153 and 163. Some stories have been reprinted from their later appearances in Buster Picture Library (the reprint titles have been used instead of the originals).

The book puts the stories in very little context. There are no creator credits, and we’re not even told when they were published, apart from a comment on the back that Rick Random first appeared in 1954. The introduction says that Harry Harrison worked on the title, and that that was when the title came into its own, but it’s not clear if he wrote any of these stories. Similarly, the back cover seems to say that all these stories were drawn by Ron Turner, but the introduction mentions several other artists as well.

The artwork, whether it’s all by Ron Turner or not, is generally very good. Backgrounds, spaceships and technology all look marvellous. The figure work is a bit looser than mainstream comics readers would be used to nowadays, but that’s not necessarily a bad thing (though you’ll have to search hard in this book for a pretty girl). In certain panels you could think you were looking at work by Bryan Talbot or David Lloyd.

Since the stories date from the fifties, it’s hardly surprising that it’s a bit old-fashioned in some ways. The earlier stories have some oddly fascistic overtones. For example, everyone has an identification number tattooed on their arms, which even in 1954 would surely have raised eyebrows, and in “Kidnappers from Mars” Rick is point man on an invasion of a world which refuses to join their World Federation of Powers.

It’s old-fashioned in other ways, too. In “Emperor of the Moon”, said emperor has “dumb African slaves”. Post-colonial critics would also have a ball with “Planet of Terror”, where people say things like, “These primitive people have many gods, Rick” and “Don’t most primitives have a human sacrifice on occasions like this?” In “Threat from Space” Rick Random works his way through twenty cigarettes, possibly more. He loves his cigarettes! In “Perilous Mission” blue whales are farmed to feed Earth’s population – though I’m not entirely sure if that’s old-fashioned or visionary! And in “The Kidnapped Planet” Rick leads a “terrorist campaign” against giant-sized invaders. I suppose the only old-fashioned thing about that is that the story doesn’t put a more positive spin on his bombings!

But being old-fashioned isn’t always a bad thing. While I could have done without the smoking and the colonialism, there’s a cosiness here that made for a very comfortable read. Reading these little-known stories made me feel as if my grandad had found them in the attic and brought them down for me. Some things may be a bit dated, but that generally adds to their interest rather than detracting from it.

As to the other stories, “Robot World” is an unashamed imitation of Asimov’s The Naked Sun, while “Frozen World” deals with the theft of gold from banks. (The frozen world of the title is Neptune.) Scientists recently suggested that the dilemma at the end of The Italian Job could have been resolved by superheating the gold to turn it into a gas – at one point in this story (a mention of ventilation) I thought I’d found the scientists’ inspiration! Unfortunately not, but it was nice to be surprised by the plot at least once: though these stories are often reminiscent of James H. Schmitz’s hard-boiled science fiction, not least in their interest in ecology, expectations here are very rarely reversed. Everything is usually pretty much as it seems.

“Killer in Space” seems to be a bit inconsistent with the other stories. In that one it’s the early days of space travel, and Venus has to be close to Earth to permit interplanetary travel, while usually Rick hops around between solar systems without any trouble. But then again, we have buses and planes in our world, but that doesn’t mean buses can fly. Interstellar travel may be practical for Rick, but not for passenger ships. And anyway, consistency with old stories shouldn’t get in the way of telling new ones (something Doctor Who has recently remembered, but Star Trek needs to learn).

Overall, reading the book was thoroughly enjoyable. The stories were exciting and entertaining, and full of variety: Rick’s job gives him a great deal of latitude both in the cases he takes on and the approach he takes to them. This book is never boring. The dialogue is clipped and to the point. The art and storytelling is dynamic and efficient. Let your attention drift for a page or two and you’ll be lost – every panel counts. If I’ve focused on what might be seen as flaws, it’s because I found them fascinating. I’d very much recommend this book to anyone who fancies a bit of straightforward, traditional science fiction adventure.

I hope we’ll see many more science fiction collections to join this one – of Starblazer, in particular. It’s marvellous to see British comics other than 2000AD being collected.