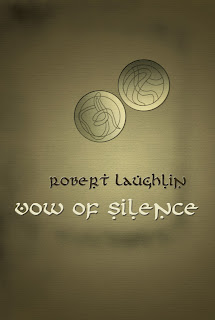 Karel Evandar is a young man inducted into the ranks of the datists, a privileged caste of officials who are charged with remembering the entirety of human knowledge. Vow of Silence follows him as he trains to enter their ranks, discovers that the privilege comes at a cost, and takes a stand against it.

I should mention first of all a possible conflict of interest in this review – I published a short story by this author here in TQF last year. Another disclaimer: I read this on my resurrected Rocket eBook, after saving from the review pdf into a Word file. Somehow I lost all instances of “fi” and “fl” along the way, so I may have misinterpreted any plot elements revolving around those letters. In particular, a mention of a “ re y” left me stumped for quite a while…

Don’t be put off by the title: an entire novel about a vow of silence would, I expect, be pretty dull. There is such a vow in this novel, but it’s not down to some monkish obligation, and it doesn’t happen until a good way into the book. When it comes, it’s a very dramatic event, with serious consequences for society as a whole. What’s more, this is a book of about 45,000 words, divided into 53 chapters (and they all have titles), so dullness is not an issue – the book was a wonderfully smooth read. Like many small press books, it does suffer here and there from overly enthusiastic fonts and occasionally erratic typesetting, but the text flows clearly and easily on the page, as does the story.

Like a Jack Vance novel, this depicts a society deformed by one peculiar element; in this case, something’s missing. I won’t say what it is, since the realisation of its absence is something that should creep up on you. You could see this as a cynical attitude towards human behaviour: humans are so silly, allowing their lives to be shaped so casually by tiny things. I prefer to see it as hopeful: humans get by, whatever the circumstances; we do our best to keep going and find ways to adapt.

Having said that, I rather wished that the book had made the deformation more of an imperative, rather than a quirk; that there had been some good reason why the missing element was unavailable, say an absence of some essential ingredient, rather than just because no one had ever had the idea before.

It reminded me of a Vance novel in other ways, too. Laughlin shares Vance’s interest in inventing musical instruments, for example. And like a Vance hero, we first meet our hero, Karel Evandar, as a young man. We watch as he grows to maturity, learns the rules of this world, masters them, and then takes a hammer to them. There’s a feeling that only those who can beat the system are qualified to change it: don’t complain just because it doesn’t suit you personally.

On first reading, the concluding section felt slightly unsatisfying: though Karel strikes the expected blow against the existing order, he’s not involved, other than as an observer, in its eventual destruction. But upon reflection I realised that he is indirectly responsible for the changes. At a crucial juncture he makes a secret decision not to help: that decision leads others to make the changes; and it’s a decision informed by all his experiences in the book to that point. That’s the moment that pulls the events of the novel together.

One interesting part of the book is its approach to relationships. We’re led to believe that the datists will find it hard to build lasting relationships, partly because they’ll never forget a harsh word or expression, and also because they’ll never forget the perfection of a relationship’s early days. A couple who have been married for fifteen years might have a pretty good memory of how things were in their early days, but that wouldn’t necessarily make new developments any less enjoyable. Also, would the ability to recall sexual experiences perfectly, for example, make a man disinclined to add to that stock of memories, or would it encourage him to accumulate more?

What’s most impressive about this novel – aside from the carefully-crafted writing, controlled pacing, and the wealth of incidental detail – is the way Laughlin develops his premise, the way he successfully extends it into multiple areas, and reflects profoundly on the implications for the people involved. It’s the same thing I like about Superman comics in the fifties: he does everything in a super way, whether it’s shaving his beard or playing baseball. This isn’t just a book about someone with a superb memory; it’s a book about how a class of such people would affect everyday life, and how their training would affect every aspect of their own lives.
Overall, a very interesting and promising debut novel.