The City in These Pages, John Grant 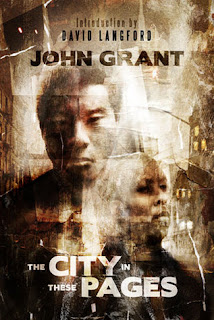 I think I do have one of them in the house, but so far it’s unread. I’ve seen a couple of Columbo episodes adapted from his books (“Undercover” adapted Jigsaw, while “No Time To Die” adapted So Long As You Both Shall Live, I think as backdoor pilots), but that’s not a lot to go on.

So I can’t judge how closely Grant has stuck to McBain’s template, but the banter is snappy, the crimes imaginative, the characters neatly drawn, and from the introduction (written by David Langford) it sounds very much like that’s the kind of thing people like about Ed McBain’s books.

Of the books I have read, this reminded me most of The Yiddish Policemen’s Union. Admittedly that’s the book around which the rest of the literary universe revolves for me at the moment – I did go a bit mad for it! – but there are similarities. Both have a world-weary tough guy teamed with a bulkier partner (here they are black and Japanese, rather than Jewish and Tlingit), and both are set in a present-day world that isn’t quite ours.

This book doesn’t quite match Chabon’s masterpiece, but it’s very enjoyable. Its only real flaw is its short length; I’d quite happily have read much more of the same. It’s more like an episode of Homicide than an episode of Columbo: you’ll be left wanting more. The conclusion left me rather conflicted… I felt rather cheated out of a proper resolution to the criminal investigation, but I was very happy with it in science fiction terms.

To get more of the same I guess I’ll have to look up McBain’s books. That must be the mark of a good homage: while you can enjoy it on its own account, it makes the uninitiated want to search out the originals. If Grant persuades a few die-hard fantasy and science fiction readers to switch lanes long enough to give the 87th Precinct novels a try, I’m sure he’ll count this a job well done.