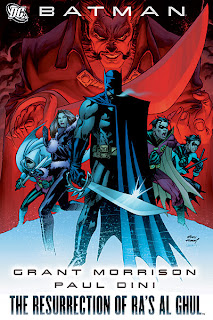 This suffers from the usual problems of a crossover between different titles: important events falling into the gaps between issues; oddly in-depth accounts of minor plot points (Robin and Nightwing spend a full issue arguing about whether Robin should take a sample from the Lazarus pit); a contrived plot; and inconsistency of writing, artwork and tone.

And though Grant Morrison’s name appears prominently on the cover, he contributes only two issues to this collection – four other writers contribute. He’s in good company on the periphery, though, since Batman himself is a fairly minor player in the book. This is really a Ra’s Al Ghul story, with the Bat-gang being occasional obstacles rather than protagonists.

One other slightly unwelcome aspect of the book is that in it we see the gravity effect at work, by which over time major characters absorb the powers, attributes and motivations of lesser ones – here Ra’s adopts the desire to control his descendants of Vandal Savage and the body-swapping of the Ultra-Humanite. Once this story’s over let’s hope he sticks to his normal territory.

But despite those issues, it’s fairly entertaining. It reads more like a Wolverine or an Iron Fist story than your usual Batman, and that makes a nice change. It also does a good job of getting the casual reader up-to-date on the Bat-universe, and seeing all these Robins together is good fun.

It does give the impression that Tim Drake (Robin III) isn’t long for this world – the stress put on all his friends (the Spoiler), family (his Dad) and contemporaries (Superboy) being dead makes him feel like a loose end. That’s a shame, but Damian, Batman’s new son, is an interesting character and would make a good replacement (if they really must replace Tim, who is my favourite Robin by far), though long-time readers might remember thinking similar things about characters like Azrael and Anarky.

Readers who bought this for twenty quid will probably rate it more harshly than someone who borrowed it from the library, but if you’ve ever fancied seeing Batman in a martial arts action movie, this will entertain. Just don’t expect the fireworks you normally get when Grant Morrison’s name is on the cover of a comic book.