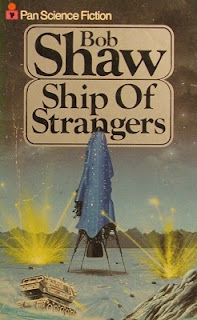 This fix-up contains five stories about the crew of the survey ship Sarafand. The Sarafand is only sent to map lifeless planets, which has fascinating psychological effects on the crew, something Bob Shaw handles with remarkable skill, and it also leads to some intriguing and unusual plots. At times they are closer to thought experiments like the prisoner’s dilemma than to other science fiction short stories, though Shaw doesn’t shortchange the reader on spaceships and aliens.

In the first story, the ship encounters an ancient and dangerous lifeform; the conclusion is a Tyke Tyler style reversal of expectations. The second considers the effect that dream tapes (a kind of virtual reality), and the resulting virtual girlfriends, have on the all-male crew. In the third story the crew discovers some mysterious alien technology; the story really strikes home with its depiction of the fear felt by a man left alone in a spacesuit in a hostile environment. The fourth story regards contact with an alien, time-travelling Shangri-La – plotwise it’s probably the weakest and most contrived of the stories, but psychologically it’s still very interesting. The final story is a mind-blowing humdinger that the blurb-writer should be shot for spoiling. (Thank goodness I didn’t read the back cover till I’d finished the book!)

They aren’t identified as separate stories, with chapter headings appearing within the stories as well as between them, but they are clearly discrete, with time passing between them and characters changing – though the protagonist, Surgenor, is constant throughout. In fact, a key feature of the book is that ever-changing cast, and Surgenor’s reflections on why he keeps doing the job, year after year, while others come and go. The title, Ship of Strangers, derives from the way the crew relate to each other; never making strong personal connections, trying to avoid any intimacy and arguments. They don’t want to care when their friends leave, as they inevitably will, so they try not to care at all. Surgenor knows he is emotionally damaged, understands the need for it, and questions whether he could stand a return to the full range of human emotions, but still wants to try, one day, when the time is right.