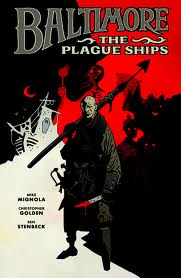 The First World War ended in February 1916. Those soldiers not killed by the plague deserted to be with their families, and there was no one left to fight. No one, that is, except Lord Henry Baltimore, determined to hunt the plague to its supposed source, Haigus, a vampire whose right eye he put out with a bayonet in a French ditch. A German bullet cost Baltimore his leg, but that insult lost him so much more, and thus his quest began, a quest which will “cost the lives and souls of everyone he loves”.

I haven’t read the illustrated novel version of this story, so I cannot compare them, but this superb volume, written by Hellboy creator Mike Mignola and Christopher Golden, with moody, clear, dynamic art from Ben Stenbeck, stands alone without trouble. It begins in Villefranche, where Baltimore makes an ally of Vanessa Kalderos, granddaughter of a powerful witch, and ends on Furiani, the island base of the German underwater fleet.

It’s a story of great scale, full of surprises and fine detail. I was particularly taken with the design of the submarine troops that appear later in the story, and especially struck by the look of fear upon Baltimore’s face as he faced almost insurmountable odds. He’s willing to put himself in danger’s way, but when fighting he’s almost the automaton suggested by his wooden leg, a killing machine with the soul of an ordinary, terrified but very brave man.

I’ll look forward to any future volumes in the series with great eagerness.