Buffy the Vampire Slayer, Season Eight: No Future for You – reviewed by Stephen Theaker 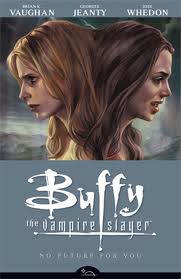 The first volume of Buffy the Vampire Slayer Season Eight (reviewed here) could have featured the gang eating jam on scones for a hundred pages and I would still have rhapsodized about it, so glad I was to be back in their company. This second book, collecting issues six to ten, can’t rely on nostalgia to see it through, but then neither did the first, which progressed the story of these characters in a way that distinguished it from the great mass of licensed comics and books.

“No Future for You” by Brian K. Vaughan and Georges Jeanty, a four-issue story, focuses on Faith, a character I’d have liked much more in the series if she hadn’t pushed Buffy into such a serious place - something Buffy herself resented. Here Giles calls on Faith to perform the kind of job he couldn’t ask Buffy to do: eliminate an untrained English slayer, a bad seed from the right side of the tracks. The first stage of Faith’s mission is to bond with the baddie and gain her trust; it goes all too well.

“Anywhere But Here”, a single-issue story by Joss Whedon and Cliff Richards, sees Buffy and Willow on a day trip to see the Sephrilian, a member of the demon elite who walks between walls and buckles reality. As readers might hope, they run into trouble and Buffy gets a chance to kick ass, but above all it’s a chance for the two best friends to reconnect. Much as I loved the final season of Buffy, the poor girl did get very isolated, and it’s good to see her smiling in a panel or two.

It’s a short book, but a terribly enjoyable one. I can’t pretend to have any critical distance from it, any more than I could offer an unbiased review of an hour spent with my family, but it’s hard to imagine anyone who enjoyed the television series not enjoying this too. It’s quite possibly better than a televised season eight could have been. A comic can give us Buffy and Willow flying over the mountains, or a giant-sized Dawn, and so much else that would have been difficult to achieve on a television budget.