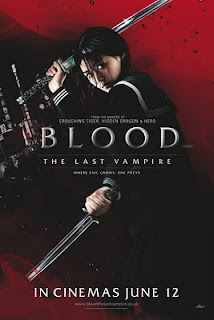 Tokyo, 1970: army brat Alice McKee (Allison Miller) is attacked in the school gym by two demonic classmates, but she’s rescued by new girl Saya (Gianna), who’s athletic, handy with a sword and wearing a cute schoolgirl outfit. She’s also an ageless vampire searching for Onigen, the demon who killed her dad four hundred years ago. As the battle moves from army base to city warrens to the wide open spaces of the country, can Saya keep Alice alive and complete her mission, or must she choose between them?

This English-language remake of the 2000 anime makes the most of its budget, and there are many nice shots and good special effects, especially during the final confrontation with Onigen, but the colour filters are overdone (the section on the military base is tinted a sickly yellow) and the showers of CGI blood look silly and obviously fake; I’d guess they took that approach so it could be removed for sensitive regions, but the film suffers for it.

This felt unmistakably at times like the work of a director separated by language from his actors; I’d guessed director Chris Nahon wasn’t English long before looking him up on IMDB. (He’s French, but cameos as a thickly-accented US Army Officer.) Liam Cunningham as Saya’s watcher seems to be in physical pain, though Colin Salmon makes the most of a quick turn.

There’s a curious lack of confidence in the quick cutting and tight-in filming of many action scenes; curious since they are staged by Cory Yuen. The best sequence is a flashback to a Touch of Zen-style forest battle, notably the one part of the film not weighed down by our American POV character.

Before seeing the credits, I’d noted the subtle, ominious score as the film’s stand-out feature: nice then to find Clint Mansell was responsible. He previously scored Pi, Murder by Numbers and Requiem for a Dream, but you may know him best for singing “Alan Moore, knows the score” with Pop Will Eat Itself.

Like the second Underworld film, which it often resembles, this is better than you’d expect; it looks good and moves well, and I wouldn’t mind watching another one, but that’s about it.