Doctor Who and the Dalek Invasion of Earth, by Terrance Dicks – reviewed 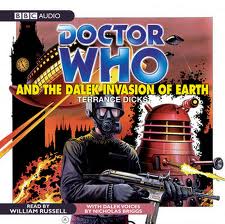 The first Doctor and his original companions, Barbara, Ian and Susan, land in a strangely quiet bit of London. Susan quickly gets the Tardis buried under rubble and twists her ankle, and forced to search for help they find Robomen, resistance fighters, bravery and love in a world that has been systematically dismantled by the Daleks.

In a moment of over-enthusiasm, I once described Terrance Dicks as “the English Hemingway”. I always felt his Doctor Who novels were storytelling boiled down to its barest, most direct essentials, lacking the frills and lace of other novels – descriptions, for example! Of course that’s because he wrote them very quickly from scripts, but, still, for many of us his books were an essential stepping stone to the grown-up section of the library.

This is one of his best adaptations, and it’s one of the best Doctor Who stories: a classic, archetypal tale of alien invasion by Terry Nation that deserved much better than 44th in the DWM reader poll – and it’s read by one of my very favourite actors from the show, William Russell, so there was little chance of me giving it a bad review!

The music’s a bit loud in parts, but that’s my only criticism. With Russell in his eighties now, at first it sounded odd when he affected an older voice for the Doctor’s lines, but before long I was loving his interpretation. His reading of the novel is wonderful throughout, and as ever Nicholas Briggs excels; you can almost hear his glee at the thought of performing similar duties on other Dalek classics.

This was four hours of sheer pleasure. It did something no other CD had managed for two years: kept Portishead’s magnificent Third out of my stereo for more than a couple of days!

Doctor Who and the Dalek Invasion of Earth, by Terrance Dicks, read by William Russell with Nicholas Briggs. BBC Audio, 4xCD, 4hr10. Amazon UK. Amazon US