The Art of McSweeney's — reviewed 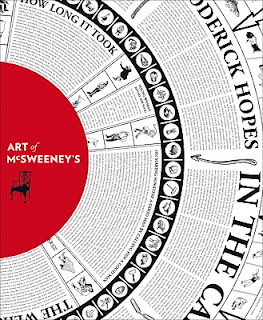 An absolutely splendid book chronicling the lives and loves of my favourite periodical and the books and other magazines that have sprung from its fruity loins. Comments from production and editorial staff, writers, artists and even the printers accompany sumptuous and detailed artwork, design sketches, unused ideas, alternative covers and anything else they were able to squeeze in, including a price guide to show that even the fanciest book is not beyond the means of ordinary publishers: it's just a matter of finding the right printers and working carefully with them.

Of course, not many publishers would be able to send people to Iceland to supervise a print job, and not many journals print in quantities large enough to make printers keen to take such fiddly projects, but one thing this book shows is that the success of McSweeney's was not guaranteed. It was earned with a great deal of hard work, often unpaid, from everyone involved. The book's title has a double meaning: as well as the sculptures, paintings, drawings, prints, postcards — the imagery — it's about the art of production. As with The Art of the Matrix, a similar book in many ways, I've come away from this with an even greater appreciation, if it was possible, for the talent and dedication that people put into my entertainment.

Utterly inspiring, especially for anyone who works in publishing.