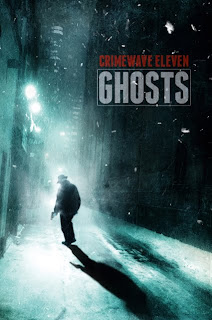 According to the publisher's website, Crimewave magazine was established in order to "plug a gap in the UK marketplace by publishing a crime and mystery fiction magazine". That sounds more mercenary than the magazine's creators probably meant it to. The attention to detail in the design and production of the book feels more like a labour of love than a mere marketing opportunity.

Founding editor Mat Coward is quoted: "We don't do cosy, we don't do hardboiled, we don't do noir. What we do is something entirely different to anything you've ever read before." The lovely noirish, hardboiled cover illustration seems to suggest otherwise, but the contents bear out his assertion, partly at any rate. None of the short fiction represented here falls neatly within such sub-genres. Whether it is entirely different to anything I've ever read before is a rather stronger statement.

I did wonder about that "gap in the UK market" - there may be a gap, but is there such demand for crime fiction that is both short and genre defying? Crime readers like books in series, they like the same detective (or analogous investigator) to keep going through at least a dozen investigations. They're notoriously loyal; once they've latched on to an author, they'll keep rooting out every last Dick Francis, Alexander McCall Smith or Jo Nesbo book until they've read them all. Does this kind of market favour an unpredictable collection of genre-bending short stories by a collection of authors, some known, others not known especially for their crime writing, some not known at all?

I suppose the fact that Crimewave has lasted eleven issues may partly be the answer to that question. The volume I read certainly brought three or four authors to my attention whose work I will keep an eye out for in future, and I am not a particular fan of crime fiction. Some might suggest that I am less than eligible to pass judgement on a "genre" collection like this, but if Crimewave is going to reach out to readers beyond the small-press then it needs to convince readers like me.

Particularly when you're pushing beyond the boundaries of "hardboiled", "noir" and other sub-genre restrictions, it's difficult to establish the boundaries of what you might call "crime fiction". How many novels of any genre don't frequently revolve around serious breaches of the law?

Two of the stories here could just as easily be described as weird fantasy. Of these, Alison Littlewood's "4a.m., When the Walls are Thinnest" is the most successful: an old lag's shaggy dog story about how he lost part of his thumb turns into a supernatural quest to perform a genuine Indian rope trick, and climb out of captivity, but climb to where? I was impressed by the unshowy but convincing dialogue, and by the way the author had captured a moment of failed bravado (the real reason for the missing thumb is less heroic than the raconteur would have us believe). I was less convinced by the mystical ending.

Mikal Trimm's "Who's Gonna Miss You When You're Gone" is a more overcooked and long-winded affair featuring the ghosts of murdered little boys coming back to help along an adult mama's boy to spiritual awakening in an unspecified Deep South setting. There's a great deal of squalid detail about the fantasies of paedophiles, and the story mistakenly believes itself important enough to warrant such treatment, but in the end it conforms to what everybody already knows about child abuse: that abused children often grow up to become abusers themselves. The supernatural element in this tale only gets in the way of any genuine understanding of a difficult subject.

There are two other stories in the collection that revolve around child sexual abuse. "Holderhaven" by Richard Butner is a laconic piece about a college graduate who wangles a job renovating an old country house museum built in 1911, but discovers a secret passage and, eventually, evidence of the original owner's predilection for little girls. What distinguishes the story from most investigative crime stories is that the mystery is solved in such a peremptory and casual fashion. After weeks of vague and mostly fruitless searching, the student bumps into a girl who has connections with the family, and who happily obliges by telling him all there is to know. Job done. It's a curiously deflating story, building up intriguing characters (the boy's acerbic boss is a black woman who was a member of both the Black Panthers and the Ku Klux Klan, as well as an accomplished stage magician) only to drop them before they can be of much use to the plot. There's a nice, clipped style to the narration, and the author has a good ear for crackling, loaded dialogue, but beneath all the intrigue one senses the protagonist's (and perhaps also the author's) boredom.

Nina Allan is at least more interested in exploring the subject. Why is our culture so obsessed with paedophiles? And what is it that marks some men out for this? Having already reviewed Allan's debut collection A Thread of Truth, I was familiar with her unique take on adolescence. She pinpoints the moments when children begin to feel themselves rubbing against the confines of their families, of their neighbourhoods, but half-knowing that they lack the worldly knowledge to move beyond what they are used to. The teenage would-be photographer in this story grows up in London, but Allan makes even this feel like a claustrophobic, small-town existence.

After the boy randomly photographs a man he thinks is the same photo-fitted suspect in a girl's murder, he unwittingly finds himself befriended by the older man. The way this ambiguous relationship develops is accomplished and disconcerting. Very occasionally, as in her other collection of stories, there's a tendency to try and overinterpret the themes on the reader's behalf, but overall this is almost the best story in the collection.

In a similar vein, Steve Rasmic Tem offers a nuanced character assessment in "Living Arrangement". An absent, thoughtless father, now an absent, regretful grandfather suffering the slow indignities of old age, moves back in with his daughter, his grandson and the latest in a long line of abusive step-fathers. I thought the gradual realisation on the part of the grandfather about what a selfish mess he'd made of his life was subtle and entirely without sentimentality: the old man is too soured to have any kind of epiphany about Family Values. The ending is sewn up a little too neatly for my tastes, but that's the way short stories go. Tem has found his character's inner voice, which is half the battle.

That can't be said for Ilsa J. Bick's "Where the Bodies Are". In this informative story about mothers who kill their own newborn children, the dialogue very rarely rings true. Characters stand around having arguments about the reasons for such murders, the correct medical, psychiatric and policing procedures, and whether these women deserve any of our sympathy. I'm guessing that the author was aiming for the kind of sparky belligerence in the dialogue that you find in shows like CSI, but nobody on a TV medical drama apart from perhaps Dr. Drake Ramoray, would be found uttering lines like, "What about morality, Miriam? What about what's right and decent? What the hell about justice? Oh wait...I forgot. I'm talking to a woman who thinks it's fine to renege on a promise and screw a guy - in more ways than one."

Bick has clearly done her research, and is keen that the reader appreciates this. Some parts of the story feel like the script of a role-play sketch designed to introduce students to the legal niceties of maternal infanticide. But as a short-story it comes across as slightly daft.

"Two Lions" by Luke Sholer has a premise that could have turned out equally fatuous - two gay hitmen get it together in the bedroom, but can't stop falling out on their assignments. It's not as silly as that makes it sound. In fact, I could easily picture this as a highly effective and slick techno-spy Hollywood blockbuster, although I'm not sure whether Tom Cruise would be up for this one. In the end though I lost interest in the weaponry and the austere, absurdly disciplined protagonist.

Similarly efficient and punchy is Christopher Fowler's "The Conspirators", which seems to enact the cliche of the corporation as a psychopathic entity. Fowler creates a world where every top executive post seems occupied by someone with the moral compass and capacity for violence of Patrick Bateman. It's compelling and expertly done, but perhaps a little bit too slick to be all that memorable, although it at least has a sense of humour, however black, that "Two Lions" seems to lack.

Cody Goodfellow's "Neighbourhood Watch" is funny too, and also rather appalling. A conservative Christian Neighbourhood Watch co-ordinator and junior sports coach surveys his neighbourhood with secret video cameras, enforcing his moral code with outrageous violence. When a brothel opens on his patch, he dons the ski mask and sets to work. The wit in this gruelling slog through various scenes of sexual degradation and bloody vigilantism, lies in how carefully Goodfellow has captured his narrator's voice. He sums up one stricken prostitute by observing, "Not a bad girl, at least not when she lived with her parents, but a timid hitter and apathetic outfielder."

The collection is bookended with the two halves of Dave Hoing's "Plainview", for my money the best thing in it. The first section takes place in 1975, during which the second of three teenage girls disappears and is later found raped and murdered. The second section takes place 35 years later, so it does make sense to physically separate the two halves, although I defy the reader to read through all the intervening stories before patiently reaching the conclusion to "Plainview". The story is really about collective apathy - three girls are murdered, the killer is never caught, and nobody outside of the families involved really wants the police to make much of a fuss about it. It's all rather embarrassing for the little midwestern town. There are a number of different narrators, all well drawn with their own distinctive voices. It's the sort of story the Coen brothers would have directed and cast M. Emmet Walsh in as a fat, ineffectual Police Chief.

For "Plainview" alone it was worth dipping into this collection. Of the thirteen stories collected here, I'd list four as very good and another three as interesting but improvable. That leaves six stories that either left very little impression on me, or that I felt didn't earn their place in such a nicely produced book. All in all then, rather uneven, at least to my tastes, but the best stories in here ("Plainview", "Wilkolak" and "Living Arrangement") really are very good.