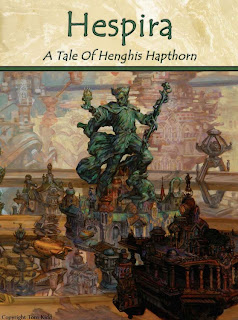 Like the previous Hapthorn novel I had read, Hespira declares its intention to be interesting from the very first page, in this case by introducing the concept of retrospectants. Collecting significant items such as buttons and twigs over the course of their lives, devotees of this spiritual path choose a day to die, and gather their friends together in order to “explain the hidden meaning and structure” of their existences, “as revealed by the seemingly random milestones” collected in their soul boxes. After the final revelation “the adherent would then be quickly killed and cremated”, leaving their boxes to become, with the passage of centuries, highly collectible. One could pick almost any page of this book and find an equally interesting idea.

Hespira is the name chosen by a young woman who has lost her memory, encountered accidentally (or so it seems) by Henghis Hapthorn in the course of what should have been a simple transaction on behalf of wealthy maniac (when emotions run high, the “muscles in his jaw moved as if small animals were burrowing under his skin”) Irslan Chonder: the recovery of his favourite soul boxes from a thief. Finding Hespira strangely attractive, though she possesses “the complete combination of feminine attributes” that he finds least appealing, Hapthorn takes her off-world to investigate her past—and also to steer clear of the violent consequences of his recent work.

This third and so far final Henghis Hapthorn novel presents a level of invention and effort that is almost too generous to the reader, though of course some apparently incidental pleasures prove crucial to the denouement, which includes a revenge worthy of Kirth Gersen. One feels for Hapthorn, a detective in a universe that makes less sense by the minute, but enjoys his gentle frustration with the universe and admires his determination to keep trying. This is a highly amusing book full of mysteries and discoveries; there is always more to think about, always a reason to keep reading. People often say that they didn’t want a book to ever end; in this case upon discovering an epilogue my reaction was literally to shout “Yes!” (Embarrassing as it is to admit that.) Very much recommended.