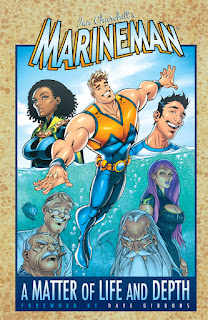 Marine biologist Steve Ocean, known to fans of his TV show Ocean Encounters as Marineman, has a secret life as a water-breathing, super-fast, super-strong Navy operative. He’s a cross between Steve Irwin and James Bond, although if you’re a child he’s more likely to save your mum than dangle you in front of crocodiles, and he has a healthy respect for women rather than treating them as disposable playthings. That’s a major theme here: respect for women, and also for friends, colleagues, sea life and the environment.

Though initially this seems like Aquaman or Namor without the angst, Marineman really has more in common with Tom Strong than either of those grumps, especially once his powers become a matter of public knowledge and he discovers his secret origin. He’s an optimistic hero, concerned about the oceans and wildlife, but hopeful that the tide can be turned on the damage we are doing. He’s defined by his actions, not his origin.

The artwork is easy on the eye; it could be characterised perhaps as a constrained manga style; big features, expressive faces, exaggerated body types, but with a clean line. Panels often look like animation cels, and many are very memorable: Marineman punching a shark, the first sight of octopus-headed villain Octo, and a succession of buff gentlemen and voluptuous ladies. Good old Marineman nearly always looks ladies in the eye, but the scene where he’s thanked for that may raise eyebrows after so many panels that reward readers looking elsewhere!

You might wonder how a collection of six issues runs to three hundred pages; there's a fair bit of padding (the first story page comes nineteen pages in), and a lot of bonus features: pages from the comics Ian Churchill drew as a kid, articles on marine biologists, posters, and displays of art assets. All interesting – and much of it is genuinely educational. Just don't expect a story as substantial as the page count might make you think. This book is little more than a taster for Marineman’s story, but I hope there’s more to come.