Reviewing under a pseudonym 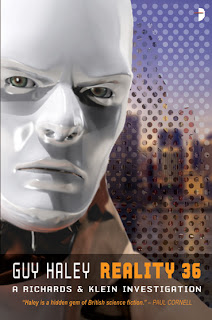 Guy Haley, a very experienced genre journalist, has been blogging about the critical response to his novel, Reality 36, a book I liked. There's a lot of good sense in the post, The Agonies of Criticism, plus a tiny bit of moaning about more negative reviews, but what caught my eye was this, with regard to his reviewing for SFX and Deathray:

I can understand why reviewers might be tempted to use a pseudonym, to avoid all the hassle. People who get bad reviews have a tendency to assume there must be a reason for it (other than the obvious), and sometimes bear a grudge for years. We're frequently accused of having it in for people, and our reviews are only read by a handful of people, rather than the tens of thousands who read SFX.

But if you think people might perceive there to be a conflict of interest, surely the answer is to mention it, or hand the book over to someone else for review, rather than disguise it with a pseudonym? That's how I ended up reviewing Bob Lock's The Empathy Effect for Black Static; Peter Tennant felt there was a conflict of interest, having done a bit of work on the book, and asked me to pinch-hit.

Maybe it's because I spend most of my time working on legal books, but I can't help imagining the reaction if a retiring judge were to mention, casually, "Whenever there was a risk of looking biased, I just gave judgment under a pseudonym to avoid complaints from picky human rights lawyers..."

In the legal system, it's essential to avoid not just bias, but also the appearance of bias, for obvious reasons. In a review that isn't strictly necessary, because there aren't the same consequences: it's just your opinion about a book, and the reader is perfectly capable of taking your biases into account, if they're aware of them.

There are many good reasons for using pseudonyms (to be honest I wish I'd used one for all my reviews from the start, so I could go to conventions without fear of getting punched!), but a reviewer using a pseudonym specifically to conceal a perceived conflict of interest is, I think, deliberately misleading their readers, even if it's with the best of intentions.

There was quite a row last year when a pseudonym turned up in the first issue of the BFS Journal, and in the course of that discussion I said pretty much the same things. I have to admit, Guy Haley is a much more experienced reviewer than I am, so there are bound to be some aspects of this I haven't considered, but I hope it isn't a widespread practice.

(Full disclosure: I did use a pseudonym for a few TQF reviews in our early days, but that was part of the meta-fiction of the zine back then, the reviews being done in character, rather than to hide who the reviewer was. We also did daft things like reviewing imaginary books, writing fictional news, and having characters write editorials. Oh, youth!)
Posted by Stephen Theaker