The Spiral Labyrinth, by Matthew Hughes – reviewed by Stephen Theaker 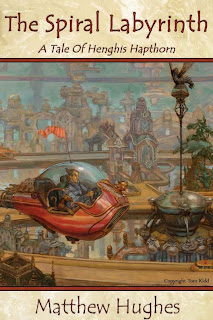 This is the second novel in the Henghis Hapthorn series, but the first I read; the Amazon listings weren’t clear what the order should be, I downloaded the preview of this one to find out, and having read a page I refused to stop until I’d read the whole book. And what a fantastic and intriguing first page it was: by its end it had promised mysteries, thaumaturges, fancy words, an “intuitive inner self” called Osk Rievor, offworld travel, and that magic would “regain its ascendancy over rationalism”. I paid my eight pounds well before finishing the Kindle preview.

In the course of earlier adventures, Hapthorn has learnt that there are magical dimples on Old Earth, where the coming age of magic is starting to seep through. Upon visiting the deserted Arlem estate, at the intersection of two ley lines, he discovers to his discomfort that in such places his “intuition” Osk Rievor is able to take control of his body. Rievor is ensorcelled and takes them to the ruins of a hunting lodge in Hember Forest; they are thrown into the future, but separated. Thus much of this novel takes place in the period after sympathetic association has replaced rationality as the guiding principle of the universe.

Despite gaining the sympathy of one Pars Lavelan, wizard’s assistant, Hapthorn seems unlikely to survive; he is a pigeon thrown among cats. As his new friend warns, “the more expert the practitioner, the less he or she partakes of morality as you or I might frame it”, and the five great wizards of Bambles have already taken an interest in this new piece upon the board of their game. Hapthorn’s only advantages are his grinnet (a former electronic assistant—an integrator—transformed by a previous brush with magic), his wits, and the fact (though he doesn’t know it) that he is not the only new piece.

I appreciate that readers may be tired of the mention of his name in my reviews, but it’s impossible to review this book without reference to Jack Vance, in that it melds two sides of his work—the fantasies of the Dying Earth (as represented here by Bambles and the wizards) and the science fiction adventures of the cluster (paralleled here by the Ten Thousand Worlds of The Spray)—into a satisfying and coherent whole. Both futures are fascinating, as are the interconnections between them, and all mysteries have satisfying and surprising conclusions.

Though this isn’t a novel of gritty realism, there is psychological verisimilitude in its portrayal of a person trying to keep his life free of the chaos that surrounds it: who doesn’t feel like that sometimes? But it is escapism too, in that Henghis is generally able to sort things out, and if Hapthorn can’t, his intuition or his grinnet can. Despite the threats to his life, the route to success for Henghis often lies through the tangled knots of a difficult conversation with his allies: the battling dialogue is a constant pleasure, Olympic-level fencing with words.

I wish there were more novels like this; reading not one but three of them was the sweetest literary treat of my year.