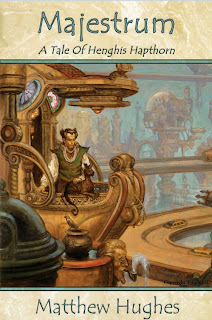 This is the first of the Henghis Hapthorn novels. Having just read the second and third in the series I was surprised at how late in the story this one begins: already, Hapthorn is aware of magic, his intuition has developed a distinct personality, and his integrator has been turned into a grinnet. That is because the novel follows on from a series of short stories about the same character (collected in The Gist Hunter and Other Stories, now safely ensconced on my Kindle), but like novels two and three it stands perfectly well alone.

The opening of the book sees him deciding to ignore all that he has learnt about the imminent overthrow of rationality and get on with his work, which takes him to The Braid, the country house of Lord Afre, an aristocrat so refined he cannot focus on members of the lower classes unless they strike appropriate poses or wear the insignia of rank. His daughter, the Honorable Chalivire, has formed a relationship with “a person of indeterminate circumstances”, which leads Hapthorn to investigate the first annual convening of the Derogation, organised by the Grass Tharks Lodge on Great Gallowan. A second thread sees Hapthorn engaged by the Archon to investigate secret plots and mysterious disappearances from the Great Connaissarium.

Despite the freelance detective’s best intentions, these discriminations will once again bring him into contact with magic and its users.

The Kindle version of this Hapthorn novel is not set up quite so well as the other two, with a contents page that doesn’t work and text throughout that should presumably be in italics left underlined, but that barely affected my enjoyment. I’ll try not to duplicate here what I’ve said about books two and three, but it was a sheer pleasure to read, full of sharp, clever dialogue, novel ideas and characterful personages (such as Old Confustible, an integrator so old he remembers the last age of magic), and to that it added the most terrifying antagonist of the series, Majestrum, whose very name is enough to knock Hapthorn’s intuition unconscious.

It’s been quite a while since I read so much fiction by a single author in a row. At school I read all ten volumes of David Eddings’ Belgariad and Mallorean during the mock exams fortnight, but I barely remember a word of those. I doubt I’ll ever say that about The Spiral Labyrinth, Hespira and Majestrum. Reading all three together like this was one of the most pleasurable reading experiences of my life.