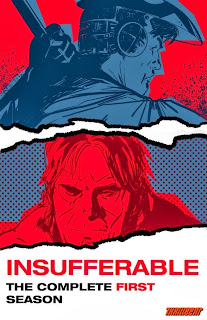 Insufferable: The Complete First Season (Thrillbent, ebook, 557pp; Comixology purchase) is written by Mark Waid, a writer whose work I’ve always liked, but who to my mind has stepped up a level of late, with art by Peter Krause, the two of them co-creating the series. It tells the story of a superhero and his sidekick, who fell out a couple of years ago: Nocturnus and Galahad. Think Batman and Robin, round about the time Dick Grayson got into a snit, dropped the yellow cape and became Nightwing. Now imagine if Dick had revealed Batman’s secret identity on live television. And in response Bruce had burned down Wayne Manor and gone into hiding while Dick became a celebrity idiot obsessed with fame and money. Then imagine Bruce and Dick were… well, no spoilers. Two years later, old enemies are returning to the fray and the dysfunctional duo are pushed back into collaboration, despite all the resentments.

This is a slightly unusual publication, in that you shouldn’t expect a five hundred and fifty-seven page book, despite the page count. Firstly, each of these pages is the equivalent of a half-page in a regular comic, ideal for reading on a tablet in landscape mode, but there are frequently just two or three panels per page. Secondly, many pages feature the same art, with dialogue and colouring changing, or missing panels being filled in. In regular print format, this would perhaps be a hundred or so pages long. Many pages are given over to behind the scenes information: for example, the feud between Nocturnus and Galahad was apparently inspired by a pair of comic creators who fell out. (Grant Morrison and Mark Millar, maybe?)

But so long as you know all of that before purchasing, that you are not getting here the same amount of story that appeared in, for example, the Irredeemable omnibuses from the same creators, none of it is a problem; especially since it is priced accordingly. (And in fact the entire series is also available to read for free on the Thrillbent website.) There’s obviously a sense that the art is being eked out, but it’s fun to see the imaginative ways that comics are being reinvented on tablets, the new techniques being developed before our eyes. (Alex de Campi’s Valentine is another innovator in this area.) Shadows being removed to reveal a second hostage, angry tweets popping up over the screen to barrage Galahad, Nocturnus suddenly appearing in a doorway: it’s all very cleverly done.

The story is perhaps not yet quite as interesting as the techniques used to tell it, but there are as many twists and revelations as you could want. The returning supervillains don’t make much of an impression, aside from one inventive showdown in a maternity ward. There’s a big strong guy, another with sharp teeth, a serial slasher, and an assassin, but they’re all just bit players in the family drama. The most intriguing villain introduced was (I thought) The Headmaster – a great name for a supervillain! – but unfortunately he turned out to be an actual headmaster, albeit not a very good one.

However, the strained relationship between Galahad and Nocturnus is totally convincing, and that’s the heart of the story. Both have valid reasons for feeling the way they do, they’ve both made mistakes, and you spend the story rooting for them to sort it out. Insufferable isn’t quite as good yet as Irredeemable or Incorruptible, but I read those from start to finish in one or two goes, and this story is only just beginning. It’s a good superhero book told with innovative storytelling techniques, perfectly tailored for reading on your tablet.
Posted by Stephen Theaker