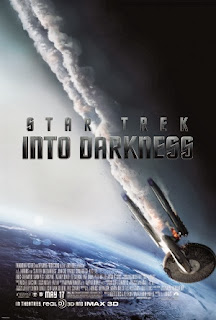 Star Trek Into Darkness, directed by J.J. Abrams. Star Trek and stripes: the warp against terror.

When Captain James Kirk (Chris Pine) violates the Federation Starfleet’s prime directive – not to meddle in the development of emerging civilisations, no matter how well-intentioned the interference – he is demoted and left to ponder what is truly meant by the words “command” and “responsibility”. Barely has he begun to do so, however, before Starfleet agent John Harrison (Benedict Cumberbatch) turns rogue and initiates a terrorist strike that threatens to bring about war between the United Federation of Planets and its would-be enemies, the ferocious Klingons. Reinstated to the Starship Enterprise and armed now with seventy-two of the Federation’s photon torpedo prototypes, Kirk grinds vengeful teeth and leads his crew in pursuit of Harrison… who has taken himself off to the Klingon homeworld and is perhaps something more than he first appears.

Kingsley Amis in his seminal New Maps of Hell (1960) noted the space-warp / hyper-drive as an acceptable science fiction convention, by which writers might – sans technical specifications yet sans also any thumbing of their noses at Einstein – sidestep the narrative tedium that necessarily would abound if all space travel were limited to the speed of light. Star Trek in this respect is grounded in the true spirit of science fiction. Its scope is undaunted, yet its underlying premise is plausible. (Enough so, it seems, to have sparked a genuine line of physics research; see Miguel Alcubierre’s “The Warp Drive: Hyper-Fast Travel Within General Relativity” and subsequent developments.) Indeed, even where Star Trek crosses into the realms of what Amis termed “flagrantly pseudo” science, it at least has the good sense to do so without dragging its heels through too much rationale. “If an apparatus of pseudo-logic is not actually set up to support it,” Amis wrote, “the possibility of recourse to such an apparatus will not be explicitly ruled out. The science-fiction writer works by minimising what is self-contradictory.”[1]

Star Trek Into Darkness begins with First Officer Spock (Zachary Quinto) diving into a volcano, his sparkly suit suggestive of some higher, lava resistant technology that (happily for everyone concerned) is never held up to the light of exposition. This, and much of what follows, has to be taken very much for granted, but the lack of sharp focus in respect to the film’s science allows writers Roberto Orci, Alex Kurtzman and Damon Lindelof – all three of whom, like director J.J. Abrams, have shown prior inclination to build elaborate structures of suspended disbelief on the big screen – to knuckle down and concentrate on their action blockbuster calligraphy: dotting the wide “i”s of drama and suspense; crossing the “t”s on each plot-twisted road; littering the aisles with adrenaline-soaked diacritics. None of it holds water – not even for a goldfish with severe memory lapses – but the humour is well-played (Simon Pegg’s Scotty again the standout), Michael Giacchino’s score boldly runs the gamut, and the whole caboodle fairly jumps forward with the happy abandon of a game of Frogger. As a frivolous piece of feel-good SF, Star Trek Into Darkness can hold its head high. However…

(And as a comparative aside, allow time here for Star Wars fans (lest we feel left out) to contrast the high-spirited grandeur of Episodes IV–VI with the affected pomposity of Prequels I–III. Let us marvel at the filmmakers’ ability to overlook the substance – and so instead take recourse to a mimicry – of what made something great to begin with. Trekkies, of course, will long since have beamed out of the cinema.)

…Star Trek Into Darkness is not content merely to play out as a wing ’em and ding ’em space opera. Nor, unlike the Star Trek prequel of 2009, does it pay thoughtful homage to the original television series (1966–1969). What the viewer is presented with instead is something of a mishmash, which through tokenism and bumptiousness may cause not inconsiderable affront to the dignity and intelligence both of serious fans and of casual viewers (although the qualms of hard-core Trekkies[2] will largely pass unnoticed by anyone considering Star Trek Into Darkness as a standalone picture). Granted, the film’s underlying question of “how do you fight evil without losing your own humanity?” seems congruous with the social agenda around which creator Gene Roddenberry moulded the original series; yet in this instance the handling is clumsy. Benedict Cumberbatch is suitably enigmatic (the Sherlock star even contrives to act slightly unconvincingly in a scene where later it transpires that his character was doing just that), but taken as a whole the 9/11 allusions are rather too heavy-handed and – laudable though it may be that J.J. Abrams is involved with the Mission Continues charity[3] – the culminating spoiler (yes, it really does spoil the movie) sees an over-the-top dirge evoking the World Trade Centre’s demise… after which catastrophe there ensues a chase scene where people can be seen walking about in the background, utterly unperturbed; this ho-hum disparity seems somehow quite apt.

Where Star Trek Into Darkness best succeeds, oddly enough, is as a relationship film; and while Trekkies may not necessarily approve of the prehistory now being afforded to Captain Kirk and Co. – in a fan/fiction relationship that began nearly fifty years ago, it seems inevitable that fingers will jab bitterly to point out the characters’ infidelities – there remains nonetheless a quiet charm in watching the crew of the Starship Enterprise forge their backstory, particularly by way of the growing dynamic between headstrong young captain James Kirk and the logic-driven, emotionally neutered Spock. Whether this is enough to inure one to the dubious plot contrivances and character motivations is a question of viewer expectation; but if the Machiavellian acid trip can be taken as an acceptable convention by which physical laws are circumvented and that much-vaunted final frontier laid open, then Star Trek Into Darkness should hold the everyday cinemagoer’s attention… at least for the time it takes a genetically engineered goldfish to warp-drive from one side of its bowl to the next.