Doctor Who and the Planet of the Daleks, read by Mark Gatiss, reviewed by Stephen Theaker 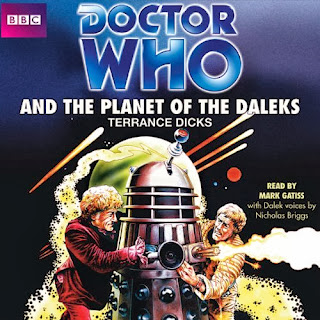 I’ve lost track of how often I’ve read the Target edition of Doctor Who and the Planet of the Daleks (AudioGO, digital audiobook, 3 hrs 3 mins; Audible purchase) by Terrance Dicks, but as soon as I saw this new reading by Mark Gatiss (with Dalek voices by Nicholas Briggs) it attracted the attention of my monthly Audible token. That voice! Imagine him reading this: “The cover illustration of this book portrays the third Doctor Who, whose physical appearance was altered by the Time Lords when they banished him to the planet Earth in the twentieth century.” In the first story of his fourth season, the third Doctor (with the help of his earlier selves) had won back the right to travel in time and space, but as usual flew straight into serious trouble. First came the drashigs, and then the incipient space war between the human and Draconian empires, a war engineered by the dastardly Daleks to pave the way for their invasion. This story begins with Jo Grant watching over the injured Doctor, the Tardis being sent by the Time Lords to Spiridon. She’ll soon venture out for help, and end up in the hands of its invisible inhabitants, but as the title suggests, this is no longer their planet. The Doctor will eventually wake and go looking for Jo, only to meet a squad of Thals, here to destroy a Dalek base at any cost.

The six original television episodes were scripted by Terry Nation, writer of the Daleks’ first appearance in 1963 (this story came ten years later), and the story is something of a throwback to those early days, with a lot of aimless running around in jungles. Structurally, it’s pretty much a remake of his first story for the programme, The Daleks. The Tardis is incapacitated, the companion falls ill and will die if not treated, the Thals are attacking a Dalek base. The Tardis interior is so tiny in this story that the Doctor exhausts its air in a matter of hours after the exterior is smothered by Spiridon’s plant life. Makes you wonder how its occupants survive when it is flying through space! The third Doctor is as dismissive of others as the first ever was: reunited with Jo after she’s been crawling around the Dalek base, he doesn’t let her speak, because there’s no way of course she could possibly have any important information for him.

But despite its flaws, there has always been something magical about this story for me: it’s Where Eagles Dare starring Doctor Who! Even now it seems unusual in being a sequel to a story from two Doctors before. And like many of the Pertwee-era stories, it benefits greatly from the Target novelisation: ironically, stories that were rather too long on television become quick-paced, action-packed adventures when compressed down to one hundred and twenty-five pages. This is a typical example, its three hours gripping in precisely the way that the six television episodes were not.

The audiobook includes fun sound effects and music stings, and Mark Gatiss’s narration is perfect, an absolute delight. Unless my memory is playing tricks, I once had a cassette copy of Jon Pertwee’s reading of the same book, and it surprises me to say I prefer this version. It’s unabridged, so that helps, but it always seemed odd to have the Doctor reading a text in which he was a character. As read by Gatiss, even the worst dialogue of the story (“I’m qualified in space medicine, I’ll do what I can for your friend”) becomes something to savour, and he tickles the listener with those words and phrases which adults may find amusing (the noise made by the plants splatting on the Tardis). However many times you’ve read the book or watched the episodes, this new audio version is well worth a listen.
Posted by Stephen Theaker