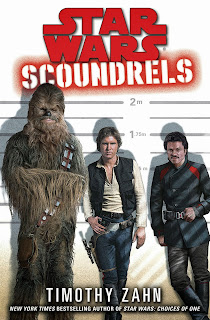 The Imperial Death Star has been destroyed – no small thanks to Han Solo – but Han has lost his reward money, and so he and Chewbacca must find some other way to pay back Jabba the Hutt. Retrieving stolen credit tabs from a Black Sun sector chief might seem a risky prospect, especially while his Falleen boss is staying as houseguest, but a torpid, slobbering Hutt is driving Han’s needs; and besides, the payoff for this job promises to be as big as the safe is impregnable. Trusting to his gambler’s luck, Han starts putting a team together.

Since relaunching George Lucas’s franchise with his Thrawn Trilogy (1991–1993), Timothy Zahn has been very much the doyen of Star Wars in written form. Combining easy prose, compelling storylines, scientific exactitude and a knack for characterisation, his novels – nine, prior to Scoundrels – have provided many highpoints within the crowded scatter plot of the rapidly expanding Star Wars universe. Some excellent SF writers have followed Zahn’s lead – Roger MacBride Allen, for instance, and Kristine Kathryn Rusch – but Zahn has remained fan favourite, introducing classic new characters while at the same time fleshing out those of the original films. His passion for Star Wars is manifest, and while doubtlessly it is shared by other authors, to date it has been Zahn playing Wookiee to their Ewoks; R2–D2 to their C-3PO; or dare we say Harrison Ford to their Mark Hamill? Star Wars will always be enjoyable to its hard-core fans. Zahn’s gift has been to afford his novels sufficient independence that they remain accessible to non-aficionados.

Perhaps, then, it is a sense of unfulfilled expectations as much as anything else that makes Scoundrels seem something of a letdown.

Frank Compton, the protagonist of Timothy Zahn’s Quadrail series, holds a particular fondness for old movies (and by “old” we’re talking not just from the character’s perspective but also from the reader’s); and from reading Scoundrels one might well suspect Zahn of sharing this nostalgic love… and of having crafted his latest novel in rather indulgent homage to the 1960 Rat Pack heist film, Ocean’s 11. Zahn’s writing is as engaging as ever, but the criminal capers plotline is by its very nature somewhat facile (and yet intricate enough to preclude Zahn’s penning anything but the odd, quickly fired paragraph towards his secondary plots). Scoundrels presents us with a happy heist scenario, and the eleven eponymous ne’er-do-wells, much though Zahn tries to obfuscate the details of their journey, never seem in any real danger of not reaching their destination. The lightness of Zahn’s story is not itself out of place (in fact, some readers may find it refreshing when so many Star Wars books have taken themselves far more seriously than did the originating movies) but it has no corresponding dark element – no destruction of Alderaan; no sacrifice of Obi-Wan – and whatever perils are presented, they lack that trash compactor sense of urgency that allows the audience momentarily to dose on adrenaline and so doubt the foregone conclusion that all will be well. History cannot be rewritten; thus Han, Chewie and Lando Calrissian must behave (and survive!) in a manner that is consistent with their reappearance in The Empire Strikes Back. This surely demands, though, that greater ambiguity be given to the lesser-known characters… and yet, courtesy of the Ocean’s 11 angle, Zahn has lumbered himself with too many of these and has left himself too little room in which to move.

Although several Star Wars books have set out to fill gaps or tidy up inconsistencies within the original trilogy of films, Scoundrels situates itself somewhere in continuity’s no man’s land. It feels squeezed in, almost; fun but essentially pointless; and further to this (lack of) agenda, Zahn at times seems uncharacteristically perfunctory in dealing with the moment at hand: Dayja’s martial prowess; Han’s coat hanger escape; Sheqoa’s going to ground – whereas aspects of technology are expounded upon in depth sufficient to submerge the reader in Zahn’s setting, these foreshortened instances of action, suspense and drama are passed over with an odd sense of neglect, as if Zahn became so caught up in bedevilling the Ocean’s 11 intricacies of plot, that he lost interest in other details and so allowed them to drop sketchily into the background. Zahn’s previous Star Wars novel – Choices of One (2011) – was something of an exemplar, so perhaps it is quibbling to pick thus at his latest offering; yet, truth be told, and readable though it undoubtedly remains, Scoundrels is not Zahn’s finest. Indeed, it is hard not to feel that the Star Wars legacy, rather than being enhanced by this particular story, instead has been misappropriated to provide a convenient setting (and a smuggled pair of crutches) for something that intrinsically should have been a stand-alone work.

Like the Jedi of old, surely Timothy Zahn will return, striding like an AT-AT across the Star Wars landscape, but as for now, well might Wookiee-lovers throw their heads back and warrrgh! forlornly.
Posted by Stephen Theaker